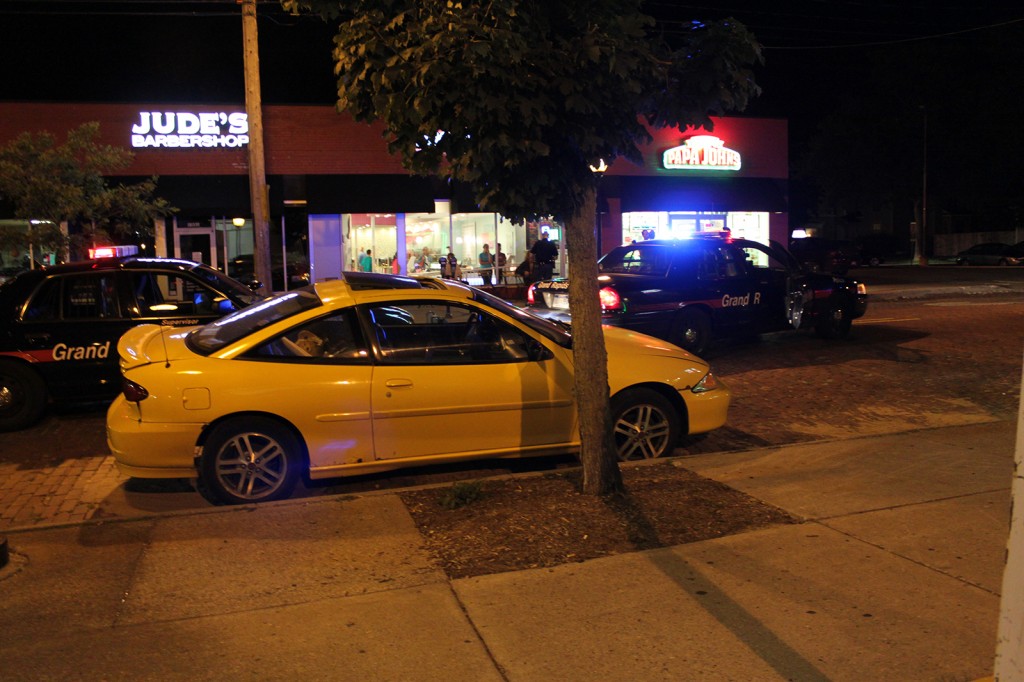 Grand Rapids Police were called to the 1500 block of Wealthy St. SE where a fight broke out in front of a frozen yogurt shop shortly before 10 p.m. Tuesday.

Spoonlickers was about to close when two young men, one black and one white, approached the customers sitting outside. After harassing several customers, one customer got up and started to fight. Two others joined in and the white male fled the scene. The black man then pulled a knife. He proceeded to chase the three customers in front of the frozen yogurt shop, threatening to stab them.

One customer who was uninvolved convinced the man to put down the knife and it was quickly thrown inside Spoonlickers by a bystander. The man decided he wanted it back and when he approached the front door, several customers and employees shoved him back. At this point the man who originally engaged the suspect had returned and grabbed him. After body slamming the suspect into the sidewalk, he restrained him.

The owner of Gino’s Pizza and manager of Papa John’s then took over and held the man down until police arrived.

According to Lieutenant Mark Morris, of the Grand Rapids Police Department, the suspect was arrested on a felonious assault and taken to the Kent County Jail.

Lt. Morris said the two groups did not know each other previously and it seems to be a random event.

“They were just a couple of thugs,” said Pete Lombardo, owner of Gino’s Pizza and one of the men who restrained the suspect until police arrived. “They were out looking for trouble.”

Three people were injured in the fight. None of the injuries are considered serious and no one was stabbed. Two were interviewed by police. One man, who was walking his dog during the fight, was struck in the face by the suspect, but he left before the police arrived.

Police are still looking for the accomplice that fled the scene. He is described as a white male, 5 foot 7, wearing an orange T-shirt and has a cross tattoo on his arm. Anyone with relevant information is asked to call Grand Rapids Police at 616-456-3400.