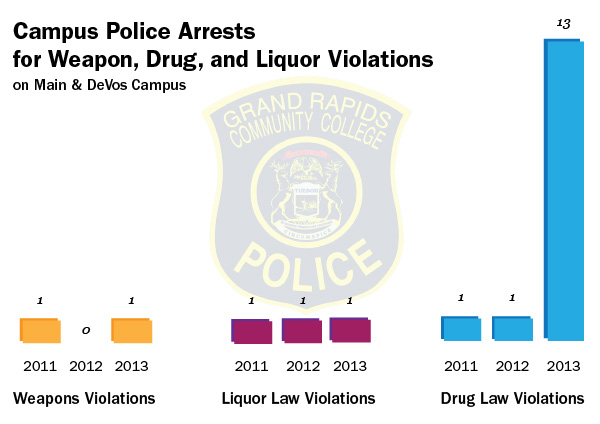 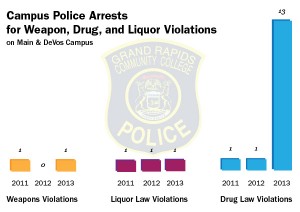 The Grand Rapids Community College Police Department released the annual security report of local campuses at the beginning of October. The report is a 65 page document, that the college is required to compile, and details the purpose of the GRCCPD and the proper procedures and definitions that structuralize the force. Campus officers serving in the college’s jurisdiction are trained professionals, who must deal with not only students on a daily basis, but also denizens
of the surrounding area.

In contrast to previous years, there was a surge in drug-related violations during 2013. Marijuana decriminalization was implemented last year in Grand Rapids, but the amendment does not include the GRCC Campus. That discrepancy is created when a student signs the student conduct policy contract, when they enroll.

Rebecca Whitman, Chief of Campus Police, explained her take on why the increase of drug law violations is not because of the decriminalization.

“The increase is probably more due to the proactive duty the officers are doing and the number of traffic stops they are making,” Whitman said.

If a student is caught possessing marijuana on campus, although it is within Grand Rapids, he or she is charged under state law. Whitman went on to explain that not all arrests were students, and her officers are continuously being taught to recognize people under the influence of drugs and alcohol. That education refers to GRCC staff as well. They are trained to find indicators of substance abuse by signs like declining grades and erratic behavior. There are also prevention programs with the purpose of informing the individual of the long term dangers associated with alcohol and marijuana.

“From a law enforcement perspective, all we can do is have more contact with people in making sure we are seeing and finding the violations when they occur,” Whitman said.

The 2020 Tokyo Olympics Are Underway