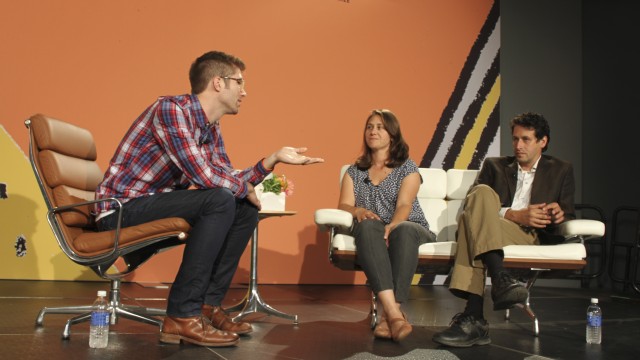 Gina Reichert and Mitch Cope, winners of the 2012 ArtPrize juried grand prize for their SiTE:LAB installation, Displacement (13208 Klinger St), moved to their current home, in Detroit, nine years ago. The former Polish deli, that had its windows boarded up for more than 30 years, was supposed to be a sanctuary providing peace and quiet for Cope to start his own art studio.

Around five years ago unforeseen circumstances changed all of that. The married couple decided to help the neighborhood when tough times fell on the city.

They were the guest speakers at Tuesday’s Critical Discourse, located at the ArtPrize Hub. They spoke about their urban renewal efforts in the bankrupt city.

Cope and Reichert, co-founded their art practice, Design 99, in 2007, to investigate new models of contemporary art and architectural practice. They started the non-profit, Power House Productions, in 2009, to facilitate others’ work and seek out opportunities to experiment with art and design within the neighborhood.

The original Power House was vacant before the duo bought it. At first the neighbors didn’t know what to think and some even questioned why they were there, especially after fellow artists and designers cut a triangular hole in the roof in the back and set up giant south-facing windows to create a more energy efficient home.

“The house needed a heating system,” Reichert said. “So, of course, we cut a giant triangle-shaped hole in the roof…Some of the things we do with Power House, or the neighborhood in general, is take these negative situations…and find what’s positive.”

The neighbors have come around for the most part. Some have even pitched in with cleanup or construction projects. Cope doesn’t think that his mission has to have one meaning.

“It’s not maybe the most pragmatic approach,” Reichart said. “Or maybe it’s not the most direct route, but it’s a theme that runs through a lot of our work, ridiculous but functional.”

“I like the idea that art can be functional,” Cope said in an interview after the presentation. “All art is functional to some extent.”

“We live there,” he said. “We wanted to save the neighborhood.”

Power House Productions and Design 99’s idea has grown to multiple projects in the neighborhood, including other home renovations and a skate park, to Garbage Totem no. 1, which they call an exercise in neighborhood resourcing and construction.

When asked about participating in ArtPrize in the future, Cope said, “I wouldn’t mind doing it again,” Cope said. “I think there is a couple year moratorium…but I feel like lightning doesn’t strike twice…you never know.”

To learn more about Reichert and Cope, and their projects, visit powerhouseproductions.org or visitdesign99.com.