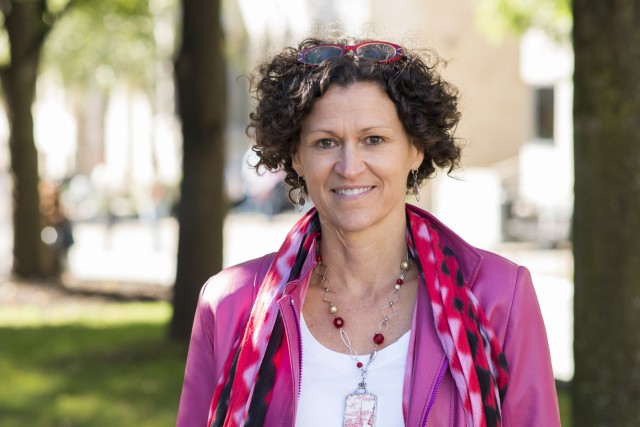 Professor Hillery Haney, otherwise known as ‘Madame,’ said she was imminently hooked on French at a young age.

Haney has been teaching French at Grand Rapids Community College since 2001. As a native of Grand Rapids, she has lived in the area much of her life, but has also spent significant amounts of time living and teaching abroad over the years.

“Back when I was in third grade I had a friend whose mother was from Quebec,” Haney said. “Her mother came in and taught us colors, numbers, and the alphabet.
I remembered it. I retained it.”

Even though she had a connection with the French language as a child, Haney did not begin formal French lessons until high school.

“I was super social, so I sat next to this really cute boy, and I think all I did was stare at him,” Haney said, laughing. “It was a no-brainer (to take French)…but I was not great at it.”

“In high school I went to go stay with a family (in France) for a summer…I went for the whole summer, and understood nothing. I was homesick like you would not believe.”

Haney said her mother was a big supporter in her studies over the years.

“My mom was always into art films, and collective foreign films…she was always exposing me to the impressionists. That talk about French was just…always there.”

After graduating from Ottawa Hills High School, she went on to study at St. Mary’s College in Indiana, with no plans for a specific major, but she did have an interest in continuing her French studies.

“In order to go to France I had to take a course called ‘Intensive French and Lab,” Haney said. “I never studied so hard in my life! I was starting out with Fs, and I ended out with a B, and I got to go to France… Everything I took there was in French, and I lived with a French family for a whole year.”

Haney said that particular study away experience was critical to her fully grasping the language.

“There is no way I could have majored in the language if I had not spent that intensive time in the country. It was not a natural gift. It was super hard, but all the work translated over, so I became a French major.”

“I worked at Macy’s, which was then Hudson’s, in retail,” she said. “I did not know what I wanted to do. I had a French major and a communication’s minor.”

Haney said she worked for her father’s small business for a little while, and she had an experience there that made her want to continue to pursue her French.

“One day my Dad and I went to Burger King for lunch, and there were these Dutch people sitting by us speaking Dutch,” Haney said. “It was that moment I said to myself ‘I have to do something with my language. I have to.’ When I heard them, I realized that was just what I need. I need language to be a part of my life.”

Haney said from there she became serious about teaching, and went back to school to get her teaching certificate from Aquinas College. She taught grades 7 through 12 at several Grand Rapids Public Schools from 1989 to 1999. While at GRPS, she met present day GRCC colleague, Bernard (Bernie) Manker.

Haney started a graduate program in French at Middlebury College in Vermont, and then started looking for oversees teaching positions. She eventually landed a position at an American school in Rabat, Morocco through a job fair in California.

“When that job offer came, and it was a French position, in an American school, I thought, that’s mine,” Haney said. “They offered me the position, but then it was not all that easy because I had just started dating my husband Raymond.” Haney eventually decided to go because her and Raymond agreed that they would somehow make it work.

She said her experience teaching in Morocco was wonderful, and beyond anything she imagined. The school was English speaking with an international baccalaureate degree.

“I was hired to teach French and Spanish, but I ended up teaching just French,” Haney said. “I was the only American teacher (in the French program). There were eight of us French teachers, and they decided they wanted an American…it worked just beautifully.”

“My experiences compared to my student’s experiences were like nothing. I thought the parents would be upset if their child would have gotten my class… wouldn’t you want a native French speaker? I thought that it was going to be an issue, but it never was.”

Haney said she had a great tri-cultural experience, even though some unexpected challenges came up while she was living there.

“I was in a modern (dance) class, doing a turn barefoot, and I had a stress fracture,” Haney said. “I just kept moving on it, and it felt so painful. I had crutches, so I started hopping on one leg, and then I did the same thing to my other leg, and ended up in a wheelchair for most of my time in Morocco.”

“People checked on me, I had friends, I could still socialize,” she said. “It was hard because I did not have my freedom, but there were some really amazing experiences that came out of it. I got to go to the King’s doctor. My friend’s father-in-law, was the doctor to the King (of Morocco) at the time. I remember I could not pick my jaw off of the floor when I walked into her father-in-law’s house. It was just so beautiful.”

Six weeks after returning from two years of teaching in Morocco, Haney married her husband Raymond, and moved to Nashville to start a new job.

“I thought when I was moving home from Morocco I was moving home, that I understood the mentality,” Haney said. “I did not realize that I was going to have such a culture shock moving to Nashville. The southern mentality is just totally different than the northern mentality. I had more culture shock moving to Nashville than I did moving over to Morocco because I expected it over there, and I did not expect it coming home…After an adjustment, it took me about six months, I really began to enjoy Nashville.”

Haney returned to Grand Rapids because current GRCC professor and former friend, Bernie Manker, insisted she pursue an opening in the school’s Language and Thought Department.

“When I came in, Bernie was really impactful,” she said. “We grew the program from three to seven French classes, and that was a neat thing to see. Right now the negative I see is they are cutting classes right and left…and I am so down about it.”

Manker said he has been grateful to work with Haney over the years, as they have inspired each other to work harder at their job.

“She helps me and others keep our perspective about what we do here,” Manker said. “It is very easy to become jaded and cynical about our students, (and) to make generalizations about the millennials. But the truth is that every generation has presented problems…By having a colleague like Hillery, I am reminded that what she does and what I do need to continue to be at the same level that it was 20 years ago. I am happy to say that my students continue to perform at the same level they have for many years. It is not easy to be a slacker around Hillery.”

Haney has put together eight study away programs for GRCC over the years to both France and Morocco.

Haney said it was a huge move to have study away offered in Morocco.

“Since 2004 I have been trying to figure out how I could do a trip to Morocco. In 2010 (her first trip)…I was really excited to be able to expose students to that kind of variety.”

“When I came back from teaching in Morocco, it was 2000. Then a year after that 9/11 happened. I kind of made it my own purpose to educate people on the Muslim world…I felt like I had a responsibility and a calling to figure out a way to show people how we cannot stereotype, and we cannot make judgments based on…an act, a very terrible act. I felt kind of a calling to expose people to the diversity, and to break those barriers and prejudices.”

In addition to teaching French classes each year, Haney teaches a humanities class for each of her study away trips. Many of Haney’s French students end up attending study away and taking that class in addition to taking French with her.

“Having been on two abroad trips with her, and having her for (French class) two years I can say she is great,” GRCC culinary student, Kara Faasen, 21, said. “Madame isn’t just a professor but is a mother figure… One of my best memories with Madame Haney would be in France when she would take us on ‘little’ detours that would last for hours, but were well worth it.

“After taking four years away from school she was one of my first my college professors coming back,” said former GRCC French student Amber Sackett, 24.

“She takes her teaching really seriously, and expects students to do the same. I found out from GRCC that I needed one more credit to complete my associates, and I approached and asked her for an independent study, she was very willing to work with me, even though independent studies tend to be a lot of work for the professor.”

Haney said she has been pleased with the way the study away program has influenced her students.

Haney said she would love for more people to understand how important it is to speak a second language.

“People do not understand how widely French is spoken. French is spoken on five continents. People are so narrowed into the Spanish. Which is important, it is, but when you leave here French is not only a language that you communicate with people in France, the French colonized all over the world, so those countries are still French speaking, and it becomes this common language between other nations.”

Haney recalled a trip to Russia to visit a friend who was French born, and her Moroccan husband. It was there she realized the value of her experiences of interacting with friends of other cultures.

“I remember sitting at the table, going ‘we are supposed to hate each other’ There was not a nationality,” Haney said. “That’s what people do not see. When we all understand each other, and we become friends, the conversation is no different. We all have the same desires and the same needs.”