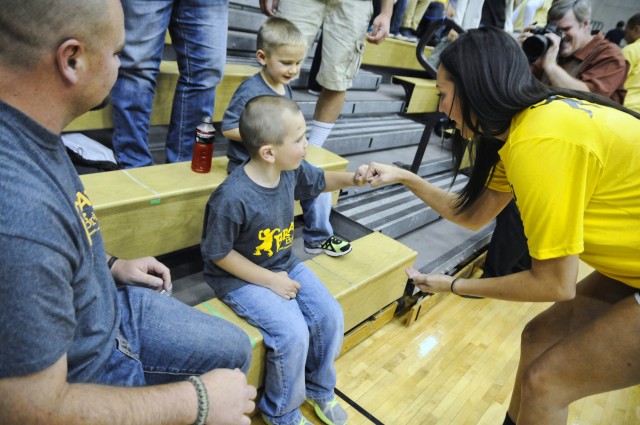 The Grand Rapids Community College volleyball team hosted a pediatric cancer awareness night, along with a special guest, Brady Bustrum, at its last home match of the season.

The 5-year-old Rockford native was GRCC’s team captain for the evening. Brady has thalamic lymphoma and has been undergoing chemotherapy every other Friday since being diagnosed in February this year.

Brady called and won the coin toss for the GRCC, and was introduced with the team and had his own seat on the bench.

“Awesome” is how Brady replied when asked how it felt to be part of the team for the night.

Brady is now 1-0 in his role of captain as GRCC defeated Lake Michigan College 3-0.

“It was an opportunity with a much bigger cause than a win or a loss to come out and honor Brady and his fight,” GRCC coach Chip Will said. “It was nice to bring a smile and happiness to him.”

After the victory Brady was all high fives and fist bumps with the team.

“It was nice of Brady to come,” GRCC sophomore Amanda Glaza said. “He really helps us remember to keep pushing and fighting. It makes us open our eyes and realize there are bigger things out there than just volleyball.”

The GRCC Volleyball  team has had other types of cancer awareness nights in the past, but this was the first being pushed as a “Yellow Out.”

“With me and the other coaches having children it is important to us that pediatric cancer is at the forefront,” Will said. “It touches a special place in our hearts, with us all having kids that are 5 years old.”

For more information regarding Brady and his battle with pediatric cancer, visit booster.com/bradys-brigade.

T-shirts are available for purchase that directly benefit Brady and the Bustrum family.

So far Brady has raised $3,150 for family needs throughout treatment.

GRCC travels to the NJCAA National tournament on Nov. 20 in Phoenix, Arizona.