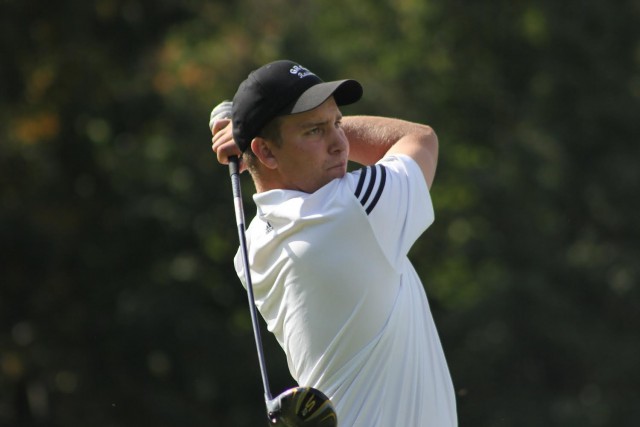 When sophomore Zach Bialik plays golf, his family is never far away. Whether in Ada, Michigan or Scottsboro, Alabama, this member of the Raider golf team is accompanied and cheered on by a miniature crowd, usually including his parents and both sets of grandparents.

“They haven’t missed a match since he started playing for us,” Head Coach Bruce VandenBeldt said.

That family encouragement has followed Bialik from a very early age.

“I started playing as soon as I could walk,” Bialik said.

Around the age of 5, he was already involved in golf competitions. After being an all-state player in both basketball and golf in high school, Bialik chose the golf route and ended up at Grand Rapids Community College as a freshman last year. During that first year, Bialik and the rest of the golf team made it all the way to nationals, taking ninth place.

Although he wasn’t considering attend- ing a community college, Bialik ended up at GRCC after VandenBeldt got a hold of him.

“Anytime you sit down with a recruit, they have to like you, and you have to like them because you spend so much time with each other,” VandenBeldt said. “With him and myself, we just hit it off right away. There was that instant compatibility.” In the world of golf, Bialik looks up to his father.

“I looked up to my dad because he taught me the game,” Bialik said. “People always say that they have their swing coaches and he’s the only one that I’ve ever had a lesson from. He just taught me the game and if I have any problems with it, I go to him and he tries to fix me…It was kind of a bond that we have together that we both go out and play.”

Bialik plans on continuing his golf career after GRCC. Although he doesn’t know exactly where, he wants to play for a four-year school in the Midwest. He wants to remain close to his family, which includes many cousins, a brother, and a sister who was adopted from China when Bialik was in fifth grade.

Bialik and the rest of the golf team are wrapping up their fall season and will be at it again in the spring in pursuit of making it to nationals.

“He’s one of the top players in the country, community-college wise,” sophomore teammate Logan Sochacki said. “He doesn’t tell a lot of people how good he is. He likes to play it down.” “Nobody’s gonna know what I did,” said Bialik. “It’s all what the team did. If we do well as a team, win tournaments, people are excited.”

Despite the fact that a community college wasn’t the original plan, Bialik is pleased with his decision to attend one.

“I think this was a great choice,” Bialik said. “I don’t regret anything.”