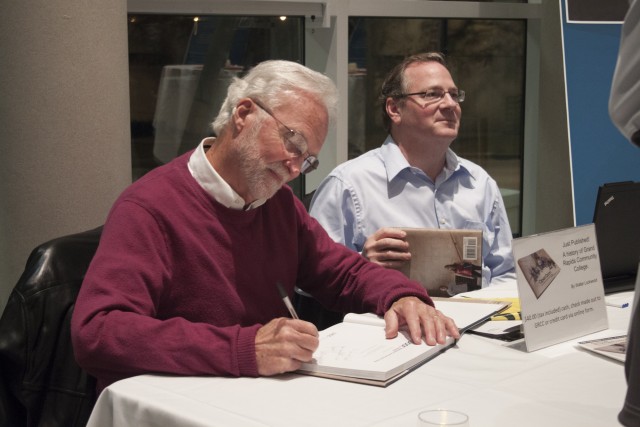 Lockwood started working on the book about a year and a half ago, and said his inspiration behind the book was simply the 100 year anniversary.

“I had written with Jim Schafer the musical (Open Door) first, so we had been researching the history,” Lockwood said. “It seemed like it would be a natural segway…and it was a great experience.”

Lockwood said this was his first experience with writing a history.

“I am a screenwriter, I had never done a history before, so it was new to me, but it was very fun because it had to do with many people that I knew and that I had to become reacquainted with,” Lockwood said. “It also had to do with a school I cared a great deal about…this is no bologna. This is a great place, and it really is a great school. I’ve had three kids come through here.”

Klawitter said putting the book itself together was quite a project that involved many people on campus.

“Klaas and I did video interviews with people who were alive for important parts of the college, including Richard Calkins, who died a few months after,” Lockwood said.

Lockwood said while has been involved with the school for many years, he still learned a lot while putting the book together.

“The foundational material came from that, the archives, the Grand Rapids Public Library, and anywhere we could find it,” Lockwood said. “So it was kind of first hand information. Much of it came from people who had lived it. I lived a bunch of it because I started teaching here the year of the 50th anniversary of the college…I am still here 50 years later…I have experienced a lot of it.”

Signed copies of the book are available for purchase in the library for $40. The book includes one hundred years of GRCC’s distinct history in 10 full-color chapters, each highlighting significant events and people who contributed to the college’s success.