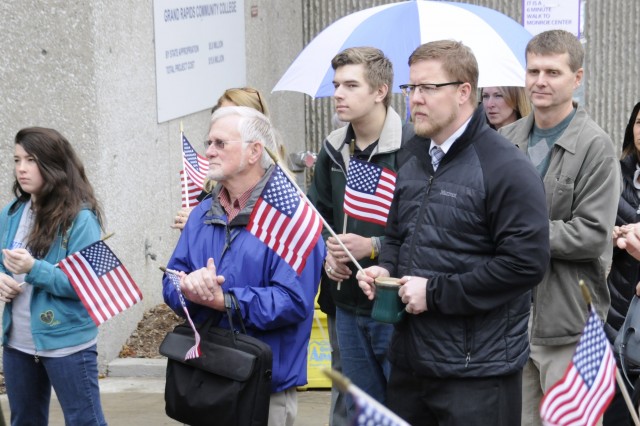 Jason Schuler from Enrollment at GRCC acknowledged the Veteran’s Success Team, who put the event on. The group included Janice Holton from GRCC’s Veteran’s Benefits Office, and her eight teammates.

Schuler then introduced the honored guests. From the service, a U.S. Army Sergeant, two U.S. navy Navy PFC, and three from the U.S. Coast Guard.

GRCC President Steven Ender addressed the crowd, and said he was happy to be hosting this event for the first time this year. The college is now planning on making the Veteran’s Day Celebration an annual event.

“I  have a sense of thankfulness when we gather to recognize the folks who have served our country,” Ender said. “There is absolutely no way that we can ever pay a perfect tribute to their service…Commemorating and recognizing the sacrifices that our military veterans make, has also been a part of GRCC’s history.”

The short ceremony was concluded with the reading of the poem “I am a Veteran” by GRCC student, and veteran Michael Cesternino.

At the end of a ceremony, Schuler recognized that there was a Grand Rapids Junior College alum, and a WWII women’s service pilot, present at the ceremony as well.

Jane Doyle served in WWII in 1941 when they started the civilian public training program for the U.S. Air Force. She attended GRJC from 1939 through 1940.

It was at GRJC where she found out about flying.

“They came into my engineering drawing class, and told us they were going to start a civilian pilot training program, so I signed up for it,” Doyle said. “They let in (only) one women per 10 men. I was 18 years old.”

Doyle said her inspiration was that flying was just something she wanted to do.

“We took classes down here at the community college, and then flew out of the airport, and then we had to pass the civil air and audits test for flight etiquette…so then I got my private license,” Doyle said.

“Then I went to (University of) Michigan, and they would not let women into the advanced program, so I joined the Civil Air Patrol down there just so I can keep up my hours because you need to have so many just to keep your license,” Doyle said. “Then I heard about the W.A.S.P. program, they sent me a telegram…We had seven months of training in Texas, same as the cadets, and then we were stationed at different bases around the country.”

Doyle said she was stationed in Seymour Indiana, and worked out of the engineering hanger administrating flights if they needed supplies.

The Veteran’s Day celebration ended with a short reception in the multipurpose room in the Student Community Center.