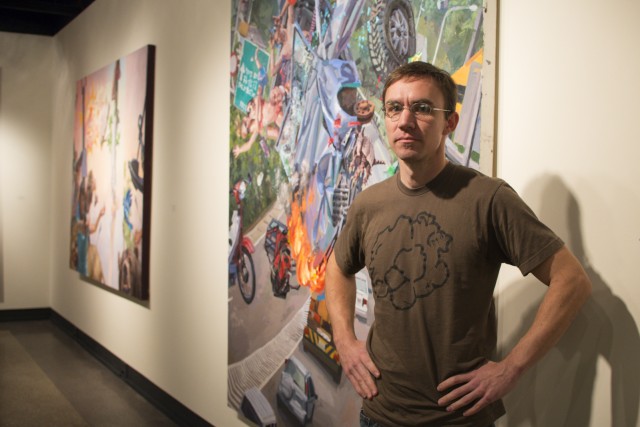 Uncertainty has proven beneficial for Ben Duke, an assistant professor at Michigan State University.  His goal was to become a writer, leading him to major in English.  When he was 21, he decided to create art instead.

“(An artist) is not something I necessarily wanted to be, but I decided I want to be it, and I’m still trying to become it,” Duke said.  “If you decide that’s what you want to do and you just start doing it and don’t stop, then eventually maybe people will start calling you an artist.”

Because of the abstract nature of his work, he compares the creating process to climbing a mountain.

“I’m on the mountain, so I’m going up, I just might not know what path I’m going to take,” Duke said.  He works with enough parameters to have direction but also avoid rigidity.

“Sometimes your vision can outstrip what the material can do or what you are ready to do in that particular time.  I like the idea to work up to … my peak performance in that moment,” Duke said.

A few years after completing a painting, Duke may rework a piece.

“If it sticks around and I change as a person, I might have to (revisit) something,” said Duke.

Sometimes he changes a detail, while other times, it’s more drastic.  As an example, in “Persistent Remainders,” which was used for the featured art on the promotional work, the face of the girl was drastically altered.

“I didn’t like that other face, so I just painted it out,” Duke said.

His desire to modify work is not negative.

“I like working on the old ones,” said Duke. “I feel like I’m collaborating with myself. If I’m not going to repaint it, maybe that’s a completed work.”

“I’m really after making a painting that can have multiple reads that gets people into a target zone,” Duke said, when asked whether or not there is a definitive narrative to each painting. “Hopefully it creates this dynamic, visual experience that keeps people off guard.”

While exploring Duke’s work online, a reoccurring symbol in his work is an octopus.

“The images often come out of abstraction, and often when I am laying marks down on the surface, then I’ll end up with a lot of circles,” Duke said. “It’s really easy to find an octopus in all those circles.”

As he continued, the octopus in his paintings began to symbolize a “displaced individual”, or in a related, more clichéd term, a fish out of water.

When asked what general words of advice he has for GRCC art students, he replied, ““Keep working through, because art-making is something (you have to) embody.  I think of it more as music or sports, where it’s not 100% an intellectual thing, it’s a body thing.  You also have to perform.  There’s a lot of muscle memory involved.”

According to Duke, art hasn’t gotten any easier.

“You have to learn to embrace the struggle,” Duke said.

The opening reception for “A River Without Banks” was held on October 28.