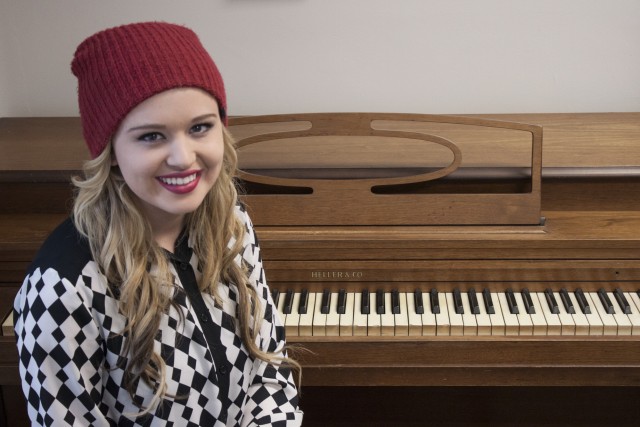 At Grand Rapids Community College, it’s common to walk the halls beside many talented students and have no idea what they are truly capable of.

On a recent Thursday, Baylie Rajter, 19, could be heard singing to her own beat in a practice room inside the Music Building. Rajter’s best kept secret is that she is a finalist in this year’s GR’s Got Talent competition.

Rajter grew up in Atlanta in a family of five. Her dad’s engineering job drew the family to Lakewood, California for two years. They eventually settled in Grand Rapids to be closer to family.

Rajter’s been a musician all her life and has been performing in choir and theater since her freshman year of high school. She performed in Rockford High School’s productions of “Les Miserables,” “Fiddler on the Roof,” “Thoroughly Modern Millie,” “Footloose” and “Into the Woods.”

After graduating high school, Rajter moved on to GRCC taking general prerequisite classes but was not sure where she was going with her life. Most of her time, though, was spent working two jobs to pay off her car and attending school full time.

Rajter had recently gotten a new job at Olive Garden to be closer to her boyfriend, Spencer Hale. Her third day on the job, also her younger brother’s birthday, she went to meet Hale during a lunch break. Pulling up to a red light behind a police officer, Rejter joked to her boyfriend on the phone and put on her seat belt.

“Next thing I know…my car spins out and my head slams into the window,” Rajter said.

An oncoming truck running a red light crashed into the front driver side of Rajter’s car. Hale heard the whole accident on the phone and immediately came running.

The other driver was uninjured, but both cars were totaled. Rajter did not go to the hospital.

“All I really was thinking was how I was so close to paying off this car,” Rajter said. “It was all very overwhelming.”

In the moment, Hale was caught off guard at the reality of the situation.

When signing up for classes for her second semester at GRCC, Rajter felt the need to change direction. So, she decided to pursue a double major in Recording Tech and Vocal Music.

“She could never decide a major,” Hale said. “But the one thing she kept going back to was…music.”

Rajter made the decision she felt was best.

Rajter says her parents are supporting all her efforts in the music industry and that her dad continues to give her constructive criticism.

Rajter spends her spare time in between classes in the practice rooms in the music building, singing and improvising on the piano.

“When I’m in the practice rooms just playing random chords on the piano it’s just easy to…lose myself,” Rajter said.

Dr. Stephen Barton, Director of Choral Activities at GRCC is Rajter’s voice teacher. Barton said that his job with Rajter is to open her eyes to the extent of her own abilities as a vocalist.

“Baylie has this enormous ability to do pretty much whatever she wants to do,” Barton said. “She’ll do very, very well with [GR’s Got Talent].”

Rajter’s goals for the future are to eventually produce her own music and inspire others and make them feel something through music.

This October, Rajter and Hale auditioned for GR’s Got Talent. It was Hale’s first audition and the biggest group of people he’s ever played in front of.

The duo are now in the top 18 finalists for the show.

“I’ve been so glad that she could go and chase her dreams,” Hale said.

The pair will perform “Counting Stars” by OneRepublic, with Rajter on vocals and Hale on acoustic guitar.

“All I know is that (music) makes me really happy,” Rajter said. “It’s not really about the money or people knowing my name…It’s an amazing way for me to express myself.”

GR’s Got Talent will be held at 6:30 p.m., Nov. 15, at Wege Theatre. Voting will begin at 6:30 p.m. until the final contestant finishes performing. The audience may text in votes and a panel of judges will contribute criticism as well. Tickets are $15. To read more about the show, visit grsgottalent.com.