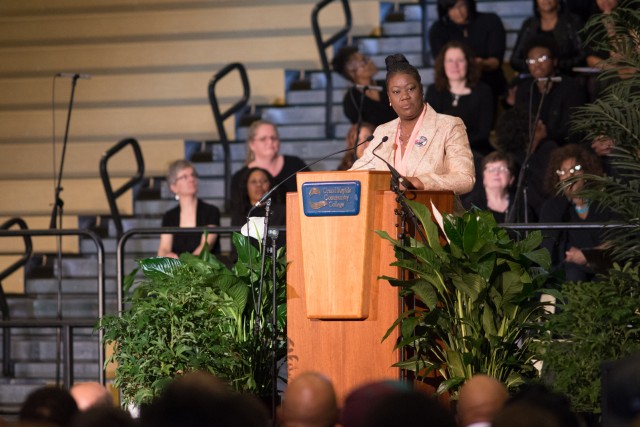 Three years after her son’s death, Sybrina Fulton told close to 2,000 students and community members about the worst day of her life.

Fulton’s son, Trayvon Martin, was shot and killed by neighborhood watch captain George Zimmerman in Sanford, Florida while walking home from a convenience store. Martin’s death led to social justice riots and protests across the country, and caused many people to raise concerns of racism and preferential treatment being a part of the American justice system.

The worst day, though, was not when Fulton got the phone call that her son had been shot and killed. It was seeing him “laid out in a casket in all white as if he was an angel.”

“Don’t get comfortable with burying our children,” Fulton said. “I want to make sure that we are not taking this lightly.”

“Don’t look at my appearance now and say that ‘she’s doing good’,” Fulton said. “My heart is torn and my heart will always be torn.”

First reflecting on her children, Fulton then questioned the audience about their children.

“Never in my wildest dreams would I have imagined that I would be able to lose a child and stand before you today,” Fulton said. “It’s every parent’s worst nightmare. I find the strength in my sons because I want to make sure that my son Jahvaris has a better life.”

Fulton reiterated to the audience her belief that Martin was shot and killed by no fault of his own in the confrontation with Zimmerman.

“It’s a bitter time in this country that our children…are not free to walk down the street,” Fulton said. “To listen to music, to wear a hoodie, to do things that every United States citizen should be afforded the opportunity to do…It’s not always about what our children are doing, a lot of the times it’s about how other people perceive our children.”

When asked how she found the courage to speak about Trayvon’s death so frequently, Fulton said that she finds strength in her two sons, “one in heaven and one on Earth”.

Fulton left the audience with words of encouragement and a call to action.

“Violence does not benefit anyone,” Fulton said, holding back tears while receiving an applause from the audience. “We have to stop continuing to be silent about what you do not like. You have to speak up…We have a broke down justice system that supports people who shoot and kill our children and get away with it…Make sure that your children have dreams.”

Before Fulton’s speech, the celebration also recognized Bodie Bickford, a sixth grader at the Grand Rapids Center for Economicology, who won the MLK Essay contest.

Administrators from GVSU and Davenport teamed up with GRCC to present six students with Dream Scholarship Awards.

The MLK Adult Choir also sang a few gospel pieces throughout the night.

“It was real good just knowing that we can minister to (Sybrina Fulton) and give her some uplifting songs,” said Rajamon Watkins, 18, member of the MLK Adult Choir. “She’s really going to bless the nation…and I just can’t wait to see it.”

GRCC Philosophy major Antonio Taylor, 24, presented Sybrina Fulton and the audience with a spoken word poem that he wrote during the Trayvon Martin trials in 2012.

“It gave me the chills just seeing her reaction,” Taylor said. “I was just blessed with the opportunity to even speak to her…She may say she’s average but to me she’s definitely a queen.”

Fulton said that she was met with a warm response from the crowd and she was appreciative of that. The crowd reacted positively to Fulton’s speech.

“I think that if MLK was alive today that there would not be as much racial tension in America when it comes to racism,” said Jeremy Barnes, 23, of Grand Rapids. “I think he would push ourselves and the black community more towards non-violence.”

“I am concerned about losing a child every night,” she said. “Every time I hear about a shooting even though my kids have been protected or sheltered, I still get that feeling.”

“I feel that Dr. King would be disappointed,” she said. “For all the work that he established and worked toward for today. Being where we are, I do not see it as progress. I think he would see that we have not taken his messages, and that we have not moved forward.”

For a look at the MLK Day March at GRCC, read here. For a look at all MLK Day events on campus, watch the Collegiate’s video coverage here.