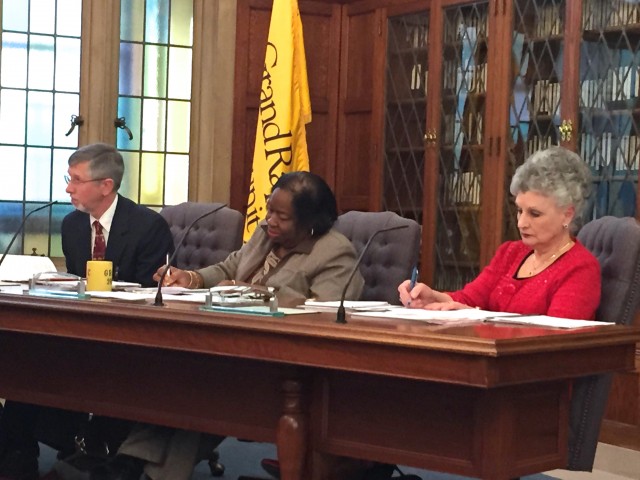 The mood was tense at the Grand Rapids Community College Board of Trustees meeting Monday, as trustee Richard Ryskamp proposed a new policy requiring President Steven Ender to report illegal behavior happening at the college, something Ender says he already feels obligated to do.

After Jim Peterson, Executive Director of Financial Services, presented the 2014-15 mid-year budget and Provost Laurie Chesley updated the board on the Student Success Monitoring Report, it was Ryskamp’s turn to address the board.

Ryskamp presented his Respect for Law Executive Limitations Policy, a document he started composing nearly two years ago. According to the new policy, President Steven Ender, must notify the board of any illegal activity taking place at the college and the corrective measures being taken.

The new policy would require the college to obey laws not dealing directly with people, such as copyrights, immigration and public health, among other things.

After Ryskamp finished, Ender clarified that as an employee of the college he is governed by a misconduct policy that requires him to uphold the integrity of the college.

“Any misconduct that violates the law, undermines the integrity of the college and creates tension in the workplace, will not be tolerated,” Ender said. “So it may be important for the board to have an executive limitation to do with this subject, but as an employee of the college, I am governed by this misconduct policy, as are all of our employees.”

After Ender’s clarification, the floor was opened for discussion for board members. Trustee Ellen James, who has openly opposed the policy from the very beginning, raised concerns about redundancy.

“To me it’s already clear, but I don’t know how other trustees feel. I don’t see any reason for us to be redundant,” James said. “I don’t think any president in his or her right mind would violate any law…If we have something on the books, that would satisfy our requirements, then for me, that’s really enough. At this point I can go on record saying I do not want to support this action.”

In response to trustee James, Ryskamp reiterated the fact that there is already an executive limitation policy regarding treatment of people, but not other laws.

“Using your logic, we should get rid of the policy that says the college should respect the laws regarding the treatment of people, because, as you’re saying, it’s already been a law,” Ryskamp said. “As far as the fact that the college already has internal policy regarding respecting the law, I think that’s laudable, but the board should not be silent on this issue…If we do not require the college to respect the law, we are essentially saying the college can do whatever it wants. That’s why we need this policy.”

Trustee Deb Bailey agreed with James about the redundancy of the new policy, but had other concerns as well.

“The other aspect is the cause for concern of the words ‘cause’ or ‘allow,’ ‘the president will cause or allow,’” Bailey said. “The president doesn’t have control over everything that happens on this campus. He does have accountability, leadership to handle whatever happens, but I think, in and of itself, it sets up a very unrealistic policy for us to monitor.”

Trustee Cynthia Bristol echoed Bailey’s concerns about the words “cause” and “allow.” Ender then suggested James ask Ryskamp to consider an amendment to the policy that would substitute the words of concern to say that the president “may not fail to take prompt and appropriate action when the president becomes aware of any violation of state or federal laws, rules or regulations or of board policies.”

After James asked Ryskamp to accept the amendment, supported by Bailey, Ryskamp chose not to.

“I do not accept,” Ryskamp said and explained his reasons why after further discussion by the rest of the board. “I proposed this policy back in March of 2013 and there’s been 23 months for people to propose improvements in it and I see no reason why, now at the last minute, after 23 months … people would wait until such a late time to propose amendments.”

James then made clear the fact that she did not wait until the last minute.

“I think if Dr. Ryskamp will recall, I have not supported this from the beginning,” James said. “It hasn’t taken me 23 months to all of the sudden to decide that I’m not in support of it. I think I have been somewhat clear in terms of how I felt about it.”

After Ryskamp reiterated his point about the time for amendments having clearly passed, James called for a vote. Ryskamp and Stewart were in favor. James and Bailey were opposed. With Bristol abstaining, the motion failed.

In Ryskamp’s final comments he thanked the board for consideration of his policy.

“I want to thank the board for its consideration of the policy I proposed and the opportunity to discuss it,” Ryskamp said. “I’m disappointed that most of you did not see need for the policy. I would remind the board that I did have two other policies proposed in the same package regarding public safety and advocacy, and I look forward to discussion of those proposed policies some day.”

Though Ender did not have a vote, he made clear his feelings regarding the policy after the meeting.

“I just didn’t think the board needed it,” Ender said, noting the overlap with the college’s existing misconduct policy. “I just think it’s redundant. If the board believes this is a value that they need to espouse publicly through policy governance, I’m not troubled by that. I was troubled by the language of that one … I can’t become aware until someone tells me, but it reads like I should be assuring that those things never happen and that’s just impossible.”