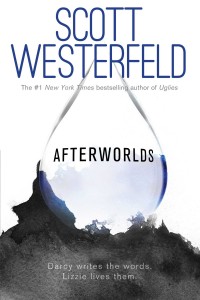 New York Times Best Selling Author Scott Westerfield (“The Uglies”) introduces readers into a new place between reality and fiction in his latest publication “Afterworlds” (600 pages, $19.99). Captivating from the first page, he brings in two different worlds, leaving my mind wondrous at the turn of every page.

In “Afterworlds” Darcy Patel is a getting her big break, as her young adult novel is on its way to being published and she’s moving to New York City. She’s in for a different life filled with book tours, parties, and finding a place of her own. But her happiness is met with countless challenges as she struggles to find the perfect ending for this anticipated story.

Time is winding down and the pressure is on as Darcy realizes that her dream won’t be an easy ride, especially when she falls in love with another writer, Imogen Gray.

Afterworlds is the place in which readers meet the main character of another story, Lizzie. After coming close with death itself during a terrorist attack, Lizzie crossed over into the place between living and dead. Touching the other side now marks her with a gift, allowing her to interact with ghosts from both sides of the afterworld, putting her in danger.

However, she’s not alone. Lizzie is given guidance from 17-year-old Tama, a fellow spirit guide, who she finds herself attracted to instantly. The danger is closing in all around them as Lizzie and Tama battle with the choice to follow their hearts or listen to the warnings in front of them.

Never making me second guess as to why I’m such a fan of his work, Westerfield swooped me into another universe. “Afterworlds” kept me guessing what would happen next in each narrative, bringing an essence to the average girl that was relatable in every way.

The fear of love itself, yet responsibility, whether in the real world or in the spirit one, is something that made the story just that much more amazing.

I craved more, especially for someone who hates a cliffhanger. Yet despite the cliffhanger, somewhat irritating characters, and the oh-so scary protagonists, this is a must read for those who are Westerfield fans or not. The supernatural calls, making us believe in the most unexpected things, facing the fear of death head on. In “Afterworlds,” there’s no choice but to believe, yet believing is a dangerous move.