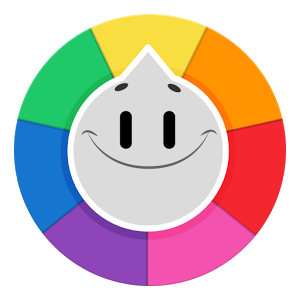 If you’re are packed full of random knowledge, but sick of getting no love when you shout the correct answer at the television when Alex Trebek asks a question on “Jeopardy,” then maybe Trivia Crack is the app for you.

The game begins with a trophy icon symbolizing each category. To obtain a trophy for one of those categories, a player must first answer three random questions correctly that come from spinning a colorful wheel that lands on an icon representing one of the six subjects. After doing so, the player gets to choose what subject the trophy question comes from. If a player answers the trophy questions correctly, he or she obtains the trophy for that subject. A player is not the winner until he or she gets a trophy for each category. Players can also steal a trophy that an opponent has already obtained by challenging them in a game that tests who can answer twelve random questions the fastest.

Not only does Trivia Crack let people challenge friends to see who knows more random facts, it also keeps the circulation of questions fresh by allowing participants to create their own questions in the game’s question factory. That aspect is one that second-year accounting major, Matt Cutting, really enjoys.

“I have had three-thousand different questions and I have not dealt with any repeated questions,” Cutting said. “You have games like Trivial Pursuit and if you play it enough times you get repeat questions.”

Moreover, you can rate already submitted questions that have been produced by other players around the world. Questions that receive an 80% approval rating or better are then put into the massive rotation of Trivia Crack questions.

After it was released last fall, Trivia Crack raced to the top of the app charts, topping the likes of Candy Crush, Instagram, and Facebook Messenger. However it’s not the trivia itself that makes the game so popular. When European gaming website Pocket gamer interviewed Etermax Creative Director Ezequiel Motillo, he emphasized how he didn’t want to just create a game, he wanted to create a brand.

“The challenge was creating a brand rather than just a game,” Motillo said. “The visual identity for the game has been key for our other businesses. We have created a toy line, an apparel line, and TV shows on broadcast television based on the game.”

One of the more surprising aspects of Trivia Crack does not lie within the game play, but where the game was created. Etermax, the company that created Trivia Crack and games like Word Crack and Bingo Crack, is a company located in Buenos Aires, Argentina. GRCC Student and Exercise Science major, Rebecca Mitchell, was surprised by this fact, as well.

“That’s awesome,” Mitchell said, “You’d think it would have come from where most of the other apps come from, Silicon Valley.”

The downside to Trivia Crack is one that comes with a lot of the free apps on the market: advertising. Most of the time, after answering a question while playing Trivia Crack, an ad that features Kate Upton as a philosophical war general will appear promoting another game known as Game of War: Fire Age. The thing is, these ads are what keeps the game free. Players annoyed by the ads can pay a fee of $2.99 and play an ad free version of Trivia Crack.