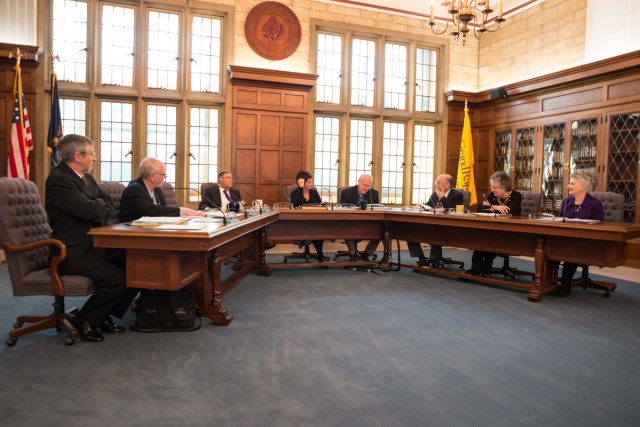 The Grand Rapids Community College Board of Trustees announced that it will not vote on a proposal to extend domestic partner benefits to staff and faculty members until the state Supreme Court rules on the gay marriage issue.

“I reprimand to the board a process to facilitate the domestic partnership benefit proposal,” Bert Bleke, chairman of the board, announced at the March 16 board meeting. “The suggestion process will include a proposal to delay our discussion and vote until after the Supreme Court’s decision regarding same-sex marriage.”

“While I’m fully aware of the fact that domestic partner benefits content is more inclusive than just one issue, I feel that this is the best way to move ahead and process…this topic,” Bleke said. “This board will process, discuss and vote on this matter in a timely fashion. What we’re trying to do here is do the right thing in the right way and I believe this will help us do that.”

The state Supreme Court is expected to rule on the issue this summer, possibly in June, according to the Equality Michigan website.

“I wish (the board) would’ve addressed it now and not waited because the domestic partner benefits concern is broader than marriage,” said Frederick van Hartesveldt, the Faculty Association President at GRCC.

van Hartesveldt proposed domestic partner benefits for both gay and straight couples at the January board meeting on behalf of GRCC faculty and staff.

“This issue often gets confused with marriage equality,” said John Cowles, Dean of Student Success and Retention. “These benefits are not just for LGBT staff, but for heterosexual couples as well.”

Cowles and his partner have been together for over 21 years.

“If anybody wants a partner bad enough, they can marry them,” Trustee Richard Ryskamp said in response to this issue. “There’s no law against anybody marrying anybody else…if they really want the benefits they can just get married.”

Thirteen states, including Michigan, still have bans on gay marriage, including the state of Michigan.

Ryskamp is often known for his strong world views and executive demands. At the board retreat on March 18, he requested the President to issue a manifesto.

“He was taking a lot of things out of context to build his own narrative,” GRCC President Steven Ender said in an interview after the meeting. Ender also mentioned that an “employee off the rails” had posted a mission statement on the Diversity Learning Center’s website that was not in full connection with GRCC’s mission statement as a college, but was being claimed as such. Ender said that the incorrect wording was taken down and has since been replaced with an improved description.

At the board retreat discussion of a higher demand on distance learning at GRCC was brought up, meaning more online classes available for students that can’t always trek to the urban campus. When Ender became president, only 3 percent of classes were available online, now that number is up to 15 percent, according to Ender.

“We’ve made substantial progress, but I think there’s more work that we can do in that space,” Ender said.