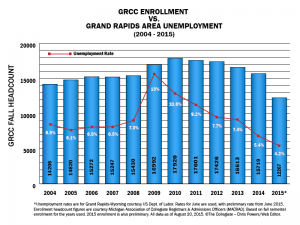 According to Eric Mullen, Associate Dean of Enrollment Management and Financial Aid, the enrollment numbers are checked weekly. This year, administrators were anticipating a drop of at least 5 percent.

Last fall, enrollment was down 5.4 percent.

Mullen said because of an extra week in the calendar this school year, the numbers may be up due to inflation.

“It’s not quite apples to apples,” Mullen said. “We think there’s a little inflation in that deficit.”

Lisa Freiburger, Vice President of Finance and Administration at GRCC, projected an estimated loss to the college of $1.5 million.

“That’s not a final number,” Freiburger said. “That number will change as our enrollment fluctuates for the next week and a half.”

To compensate for the loss, GRCC has $2 million set aside “to manage enrollment fluctuations,” in a Budget Stabilization Fund.

“It’s not where we’d like to be,” Freiburger said. “We can’t rely on that long term and we’ll continue to need to look at all expenses.”

Freiburger said there is no current plan to cut any programs.

“Clearly the largest percentage of our expenditures are in salary and benefits,” Freiburger said.

According to Freiburger, GRCC is working toward a budget that will meet the current situation through a combination of consolidating positions and planning for retirements.

Aside from the budget, staffers at GRCC’s Enrollment Center and Financial Aid office are implementing new ways to reach out to students.

A new student communication software, Customer Relation Management, is now being used to get in touch with students earlier in the process, which includes reminders sent via text.

“We have a lot of new strategies in how we’re going to interact with students and recruit them when we’re out in the schools,” Mullen said, about visiting high school campuses to talk about GRCC. “I think one of the things we’re challenged with is stereotypes on what a community college is versus a university.”

Though as reported by the Michigan Association of College Registrars & Admissions Officers (MACRAO), GRCC is not only the only college that has suffered a drop in enrollment.

While some are experiencing enrollment increases, many Michigan colleges are not experiencing the same fate. As of Aug. 10, Kellogg Community College reported a 20 percent drop in credit hours as well as an 18 percent drop in students. Though it’s challenging to pinpoint what has led to this recent enrollment drop, KCC registrar Colleen Wright has her theories.

“What I can attribute it to is folks finishing out their degrees based on what is out there in terms of the employment network,” Wright said.

With such a large drop, an impact is expected to follow as courses or sessions at KCC will be cancelled if not filled, with other departments feeling the impact as well.

Many colleges in Michigan are facing enrollment declines, including GRCC, it is clear that with the planning among college faculty those numbers could change in the future.