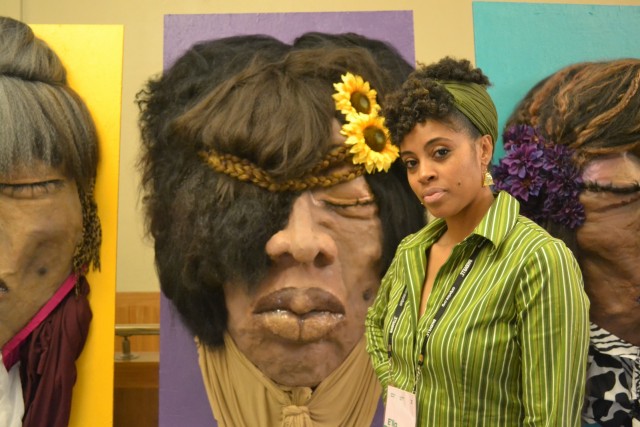 After almost a lifetime of using chemicals to relax her hair, E’lla Webber, 38, decided she’d had enough.

“In the past we’ve had chemicals, and perms and relaxers, and even hair extensions to try and look like the average American,” Webber said.

The faces, all different skin tones and hair colors and styles, are based off of her four daughters, Eleesia, 21, Alicia, 20, Alasia, 18 and Endia, 10. Webber let each of the daughters choose which hairstyle would be on the mold that represented them.

“My oldest wanted gray hair to let everyone know that she’s the oldest,” Webber laughed.

Webber was inspired to go natural after “seeing how beautiful black women are with natural hair compared to the beauty in other black women with hair extensions or perms.” Now, her and her daughters wear their hair natural.

“The only downfall that I’ve had with this whole process of being natural, is what took me so long,” Webber said, explaining how she finally decided to go natural last year.

Webber originally crafted the faces with clay and then made a fiberglass resin mold, with an outer layer of silicone.

“It dries very fast,” Webber said about the silicone. “You have seven minutes to stir it and get it on your piece.”

Webber said the skin is wrinkled because the silicone application process was rushed. She finished the faces with a matte finish powder and silicone paint. Eleesia’s face is not painted, but colored with actual makeup reflecting her skin tone.

Webber hopes viewers of her piece can better understand African-American hair and how it may look different than what’s represented on models and the media.

“It kind of teaches everyone to appreciate black women and their natural hair,” Webber said.

As far as going natural, Webber wants more women to join the movement.

“If black women don’t appreciate our natural beauty…who will?” Webber asks. On average, Webber spends two hours a night conditioning and prepping her hair for the next day. And this is just to tame it naturally.

Webber said her goal was to put her art out there and inspire a reaction in viewers, and it has already happened. “For me, as long as I get some kind of look or stare, some kind of reaction, then I feel like I won the big prize.”