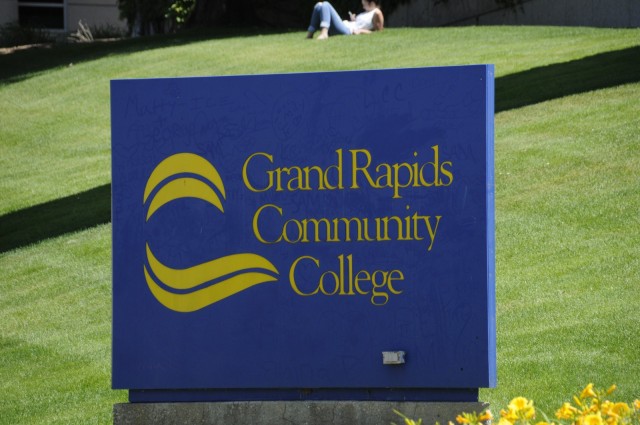 The second change will be to take away Survey of American Government (PS110) as a required class. Students will still have to complete two social science courses in alignment with the Michigan Transfer Agreement (MTA).

The third and final proposed change is to not require students to take a Wellness course in order to graduate.

“We wanted to consider allowing more choice or more flexibility in how students would meet graduation requirements,” said Patti Trepkowski, associate provost. “That was part of what we were weighing against the obvious value of the course.”

All of these requirements in place are not mandated by the MTA, but are only applied by the college. The changes would bring graduation requirements at GRCC almost perfectly in line with the MTA requirements. These changes would affect all degrees, but if specific programs wanted to mandate any of these courses for their specific degree path, that is still possible.

The Academic Governing Council at GRCC is made up of 66 voting members, 51 faculty and 15 administrators, and six non-voting members. The voting members serve as representatives for the staff in their specific department. The potential changes were proposed by a 16-member subcommittee, co-chaired by Trepkowski and Jennifer Batten, physical science department head.

Voting will take place Nov. 10, if motioned by the members of the council.

Right now, no students are represented on the council and meetings are closed, with the exception of guests.

After a final vote, the proposal will be sent over to Provost Laurie Chesley, who will, by the laws of the AGC, have the option to either accept it as is or ask for more clarification.

Faculty Association President Fred van Hartesveldt said faculty members are concerned with the potential changes and there is discussion about making the proposal into three separate votes.

“It’s been a divisive issue among faculty,” van Hartesveldt said. “We have some serious and probably long-term implications for students.”

Keith St. Clair, professor of political science at GRCC, is one of the professors that, if passed, will be directly affected by this decision. He said if the change is made, it would be a “dramatic philosophical change.”

St. Clair said the change would be radical compared to what is currently set in place by the college.

“I believe, like this college has believed over the years, American government is the most important social science class that any student can take here at GRCC,” St. Clair said.

As far as a student impact, St. Clair said the loss of a required government class on a student’s schedule will be to their detriment.

“The impact is going to be on our graduates,” St. Clair said. “I think they will be less informed about their government, about the political issues that they’re called upon to vote for, and I feel bad for them in that respect.”

English Professor Mursalata Muhammad said there is not a solid reason for the changes to the English credits to be considered.

“That doesn’t make any sense to give students the option of staying at (GR)CC for two years but leaving, potentially, only with their freshman level writing,” Muhammad said.

Muhammad believes that the changing of the requirements goes further than simply one or two classes.

“What community colleges should be doing, is, if they stay here for two years, giving students enough transferable skills to go into the workplace and (or) into a four-year institution,” Muhammad said.

Muhammad said it is “disturbing” that students won’t be required to take PS110, explaining that giving students the knowledge of their government is not only important to their higher education, but their quality of life.

“I think part of the problem is just referring to human beings as students, sometimes helps us forget about (the fact that they are) complex human beings,” Muhammad said.

“If (we) are trying to help people become better citizens, that has nothing to do with if they go to four-year schools,” Muhammad said.

Muhammad posed the question if GRCC is treating students as human beings, or treating education as training and focusing too much on graduation numbers.

If the changes are implemented, Muhammad said she, as an English professor, will incorporate more politics into her writing class, like reading articles.

“If that conversation about how our areas interconnect, and more instructors knew that and spoke to it, PS110 may not feel so isolating,” Muhammad said.

Jodi Gee, department head of the exercise science department, thinks it is good that the college is reviewing the requirements.

“Our Institution has always valued the wellness requirement as part of our general education here at GRCC,” Gee said. “I have worked here for 14 years and know that our faculty and staff understand the unique needs of our student population and believe in developing the whole student.

“I am confident that the AGC vote on November 10th will reflect the importance of this requirement for our students, and that it will remain a graduation requirement.”

Gee declined to comment about the effect of the change on students and the department if passed.

The vote will take place on Nov. 10 at a closed meeting of the Academic Governing Council.