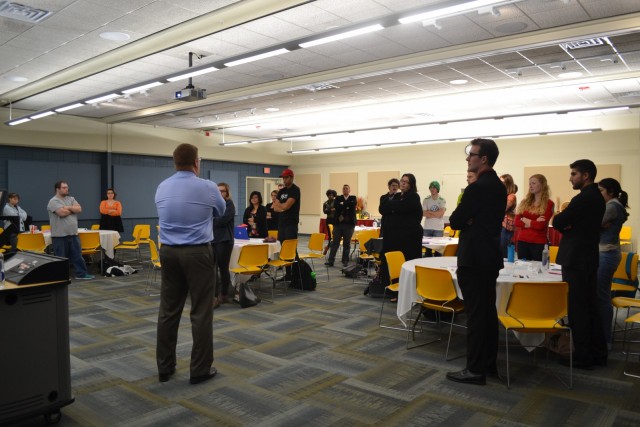 Sinclair asked for student feedback and plans to present as the student voice at the next AGC meeting.

Sinclair also spoke about his experience and new ideas from a Texas OrgSync conference last summer. Sinclair spoke about the possibility of students being able to be automatically created an OrgSync account upon orientation, which would bring more traffic into clubs.

“Practically every single other college and university in the entire United States, besides four, use single sign-on authentication for OrgSync,” Sinclair said. Single sign-on is when there is one log-in for all resources. For example, at GRCC students can log in to their Blackboard and student email through a single sign-on. Sinclair is suggesting that OrgSync be added to that automatic single sign-on.

The Student Alliance president, now paid OrgSync ambassador for the college, is asking for student feedback on the changing of OrgSync to RaiderSync.

A majority of the room raised their hands in agreement.

Kevin Curiel-Vasquez took the floor to talk about the creation of a “Club Hub.” The presidents of each club would have their own desks and mailboxes. Students will be able to freely get information from a universal office on campus.

Student clubs are given additional funding based on the club’s reputation on campus as far as student feedback and how their events have gone in the past. Requests must be submitted by 5 p.m. on the Friday, before the next Student Alliance budget meeting the following week, and at least two weeks prior to the event.

Hana Christofferson, CAB President, took the stage to speak about co-sponsored programs, where clubs partner to host an event.

The annual Global Experience Festival is a co-sponsorship between CAB, Asian Student Union, German club, and more. Each club contributes in their own way.

Eric Mullen, Associate Dean of Enrollment, ended the meeting with a presentation on “effective leadership practices and elevating your organization.”

“I’m hoping to kind of frame an idea of how leadership should be practiced,” Mullen said at the beginning of his presentation.

“I realized that (leadership is) not so much what I thought it was, but it’s a lot more nuance, it’s a lot more behind the scenes,” Mullen said. “In our culture we see the leader as the person up front, we associate it with the people giving the orders…I find that it’s really contrary to that.”