A semi-pro team passed the torch to local youth when the Lakeshore Cougars formed the Junior Cougars. A travel team part of a non-profit organization under the semi-pro football team, the Junior Cougars have assembled local talent from around West Michigan. All youth ranging from second to eighth grade can be a Cougar.

The Cougars will be coached by Obaseki, 29, a former GRCC Raider. Obaseki played football for GRCC in 2008 before moving on after the 2009 season and looks to bring his expertise to the team.

Obaseki, a Chicago native, said he wants to teach the core learning focuses of the game.

“We want to teach the game of football, as well as teamwork, hard work, self discipline and putting God first,” Obaseki said “It can also help with getting ready for Pop Warner, as well as the next level.”

Pop Warner is an organization that uses football, dance, cheerleading and an emphasis on education to develop smart, responsible, strong young men and women. Obaseki faced an injury in college and started to play again this year, as well as take on coaching. His son, Noah, is on the team as well.

“It was a get back out there and try it again kind of thing,” Obaseki said. “As far as coaching, Noah was invited to play for a travel team and he balled out. It just seemed the coaches were so stuck winning that they weren’t making the game fun. I wanted to give kids on the west side of the state to have a chance to showcase their skills.”

“I took Schulte’s football coaching class thinking it would be an easy grade but he actually taught us a lot,” Obaseki said. “The playbook I created for our final in his class is the playbook that I use for my offense today.”

Obaseki said he enjoys having his own son on the team, but he coaches every player equally.

“There is no favoritism on my team,” Obaseki said. “I play the best so if that means my son doesn’t play then so be it. I just want these kids to have a chance to showcase their talent and have that chance of falling back in love with football.”

The Junior Cougars can compete in a mini- mum of two games but up to five in a weekend of tournament play based on wins accumulated. The top three teams advance every tournament, until the champion- ship game in Dallas which crowns the champion. Winners receive rings, just as in higher levels.

Teams from all over the country come to compete, ranging from Oklahoma, Florida and Nebraska.

The first weekend of tournaments, The River City Classic, begins this Saturday in East Grand Rapids. Then the Cougars will travel to Louisville, on Nov. 7-8 before land- ing at the University of Michigan in Ann Arbor the weekend of Nov. 14, before the national championship in Dallas.

Membership is $150, covering hotel fees and travel expenses. Players must provide their own equipment to play. Uniforms will be provided upon arrival.

“I do this for free and I ask for nothing in return,” Obaseki said. “I just love watching my son have fun and watching these kids grow and learn the game I love with hard work and discipline.” 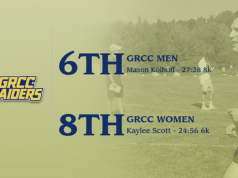