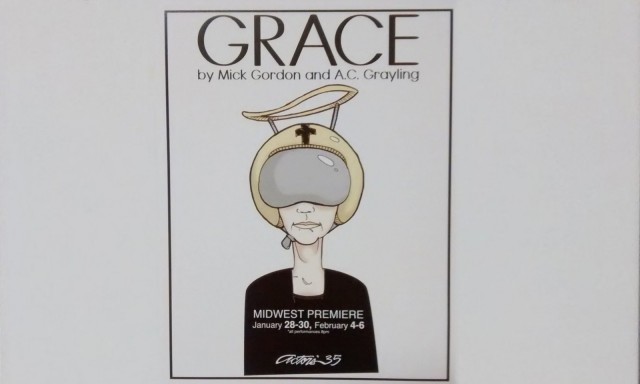 In the play, Grace Friedman, played by Jean Reed Bahle, 67, of Grand Rapids, is brought into an experiment which involves her wearing a helmet that she calls the “God Helmet.” Throughout this occurrence Grace is faced with new experiences and political theories.

Although Grace is an extreme atheist, her son Tom has chosen a more spiritual path by becoming a priest. Throughout this journey, Grace will face many choices including her family as well as herself.

Bahle describes her character as a smart, sarcastically hard-headed woman who will soon find her heart.

“She doesn’t have many smooth edges,” said Bahle, a GRCC alumni. “She has not found her heart yet…She may discover some of that by the play’s end.”

Bahle said her character’s behavior is remotely different from her own personality.

“I am more closely aligned with some of the characters, more like the peacemakers,” Bahle said. “She’s a troublemaker. She likes to stir things up.”

Actors’ Theatre Managing Director Kyle Los, 30, of Grand Rapids, said that “Grace” will be an astounding hit but a bit confusing at first for the audience.

“It is a unique show that talks mostly in memory and is often out of chronological order,” Los said.

“By the play’s end the audience will leave in discussion about religious beliefs and the plot of play itself,” Marlett said.

General admission is $28. Students and seniors are $22. Student (with ID) rush tickets, are available one hour before each show are $10.

One Vote Should Equal One Vote

One Vote Should Equal One Vote

What happens if Coronavirus comes to GRCC?