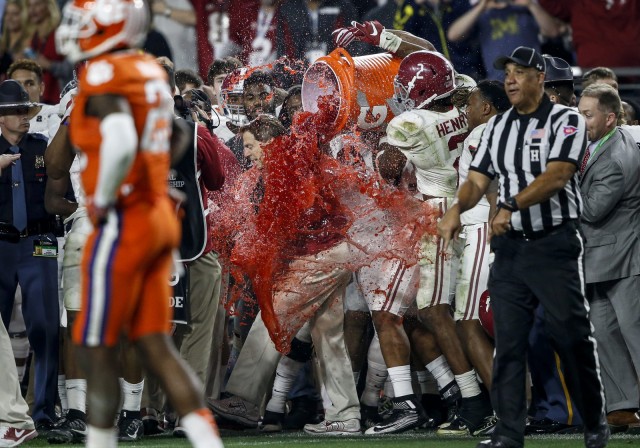 Finally we have reached a conclusion on the College Football Playoff, and after winning the last 4 of 7 national championships, it isn’t much of a surprise that the Alabama Crimson Tide are once again national champions.

The question many people still have is what have we learned?

The CFP is new to college football, and this year’s result was much different from what happened a year ago. Alabama was the second seed in this year’s playoff due to a loss earlier in the season to Ole Miss, and while Clemson proved itself by beating a good Oklahoma team and playing right with Alabama to the end of the game, many would tell you that even before the game they thought Alabama was the best team in the country.  Last season, Ohio State was a team many thought was the worst in the playoff, and they ended up winning it all. So what do we really know about the CFP, and should there be change or none at all?

In the first CFP, all of the games were pretty competitive until at least the fourth quarter, and left little doubt that it was the four best teams in the country competing. This year left us with other thoughts, because of the first two games. Oklahoma was never in control of the game against Clemson, and heavily fell off in the second half. Michigan State never had a chance against Alabama, and just looked out played physically throughout the whole game on their way to being blown out. So were MSU and Oklahoma really two of the top four teams in the country, or did a season full of lucky endings and weaker competition get them there? Regardless, they got the wins which put them there, but the question is do we need more teams and games to find out the true champion of college football?

Stanford and Ohio State were a couple of teams right on the outside looking in at the playoffs because of losses suffered to lower-ranked teams, or it came too late in the season to have time to bounce back. Many also believed that Notre Dame was a team who could compete for a Championship along with Iowa. Now Iowa was blown out by Stanford, and OSU handled ND fairly easily in their respective bowl games, but why couldn’t they also be playoff games?

Maybe one of them was actually the best team in the country, which will always leave teams like Ohio State and Stanford wondering what could have been. This is where I think the eight team playoff needs to be added to the CFP.

If eight teams were added it would leave little doubt on who the best team in the country was, because any teams below the top eight were probably not serious contenders. Now yes, very few would argue that Alabama wasn’t the best team in the country, but it was just a year ago Ohio State knocked them out and eventually went on to win the championship game. With only suffering one loss to MSU in a game full of odd play calls and horrific weather it just makes you wonder if they could have put up a better fight than MSU did when they played Alabama.

Stanford was also a team that blew out a good Iowa squad, and was playing as well if not better than anyone in the country going into bowl season. Maybe they could have been the best team in the country, but because of a couple mistakes earlier in the year, the Cardinals never got the chance to play for it. These are just a few examples along with many in the past when the BCS was still a round of teams wondering what could have been, and why I believe eight teams would be more efficient.

So what we did learn with the past two playoffs and bowl seasons is that maybe some teams were better than other teams that made the playoffs, but we will never know. While this championship game left little doubt that Clemson and Alabama were the best two teams in the country, we still have to wonder if some teams that didn’t make the final four could have changed that. A eight-team playoff would change the game, and make it more clear of who is the champion every year. And let’s be honest, who doesn’t want more playoff games in college football? The more CFP games, the better chance we have of finding a true national champion.