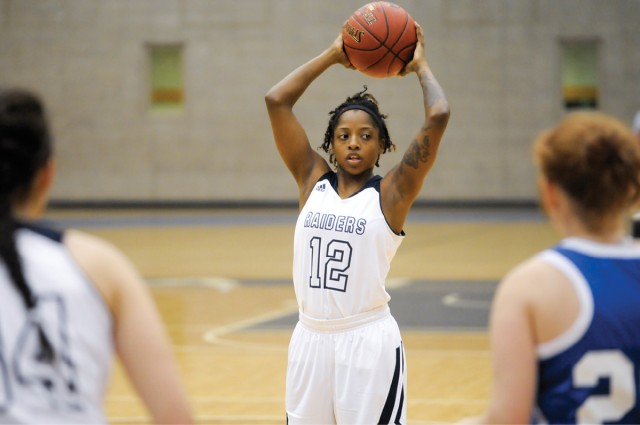 Growing up on the north side of Grand Rapids, sophomore point guard for Grand Rapids Community College, Deiona Rogers never learned to play basketball “like a girl.”

“We lived in the projects, so there weren’t that many things to do,” Rogers said. “And all the guys were always playing basketball, so I just went out there to see if I could do it … People tell me I play like a guy all the time.”

Rogers said playing street basketball with the guys in her neighbor- hood helped her become a better player.

“It’s easier to play against girls now that I’ve played with guys all my life,” Rogers said. “I’m tougher.”

Rogers has loved the game of basketball ever since she was little, but because of her family situation growing up, it was not always easy to play.

“We were really family oriented growing up,” Rogers said. “Until my mom and dad split up … I mean, we still have pieces of our family, but we’re not as close anymore.”

Deiona was caught in the middle of two important figures in her life, as her parents were giving her different messages of how to live her life.

“When my mom and dad were together, I would listen to my dad more because he was a good father figure and has always been there for me. When they split up, I went with my mom, so then I listened to her more, and my life changed a lot … My dad was very school oriented and my mom supported me more in basketball, so there was some tension sometimes.”

Rogers made the most of her situation, as she would use her athletic abilities to put herself through college.

“My parents don’t have the money to put me through college, and God gave me the gift of basketball, so I figured I should use that to go to school for free,” Rogers said.

Originally Rogers was set to go to Wayne State University on a full-ride scholarship, but the coach that recruited her was fired before their basketball season started.

“I had to start over with a new coach,” Rogers said, noting that when it didn’t work out her transcripts were held by the college which delayed her ability to transfer and forced her to take time off school “They’re actually trying to recruit me back to Wayne State, but I’m not (going back) because that messed up my life, just the way everything played out.”

And it didn’t help that there were other issues Rogers was facing outside of basketball.

“My mom and dad were sick, so I was just worried about other things, not so much focused on basketball at the time.”

Rogers proceeded to work after she was through with Wayne State, trying to figure where to go next.

“That year after Wayne, I was working at a factory that worked with carbon fiber, so it was really bad for my skin,” Rogers said. “And there were so many people there that were so negative and bitter about life and I was like ‘I gotta get out of here.’ And then people there at the factory that knew me, that knew I played basketball, were like ‘Why don’t you play again? Why would you let it stop?’ And I thought to myself like ‘yeah … you’re right.’

Rogers and a friend at the factory, who also played basketball with Rogers at Union high school, decided they were going to try and play together at GRCC.

“Me and Erica Harris planned to go to GRCC and play basketball together because we played in high school together,” Rogers said.

Harris would eventually leave the team, but Rogers stayed and became a leader and key contributor to the success of GRCC women’s basketball team.

Rogers finished the season lead- ing the team with an average of 5.7 assists per game, 3.5 steals per game and 8.4 rebounds per game.

“Creating for other people to score comes easiest to me,” Rogers said. “A lot of the time teams are focused on stopping me from scoring which opens it up for other people to score. A couple of games (during) the season, when I got the National (Junior College Athletic Association Division II) player of the week (award) I was averaging 9 assists [per game], so I’m sure it’s helped my team and helped me win that award.”

Even with Rogers small demeanor, at 5 feet 2 inches, her quickness and quick thinking has helped her succeed this past season, especially in the rebounding area.

“But being quicker and having a high basketball IQ has helped me stay out of foul trouble,” Rogers said. “Because a lot of fouls come from rebounding, and I’m pretty good at rebounding, even with my height, so I go after the ball rather than box (out) people because I’m quicker than them.”

Last season, Rogers helped her team sustain a seven game winning streak and finish the season with a winning record of 18-11.

“I liked playing basketball here (GRCC) because I met a lot of people playing on the basketball team,” Rogers said. “And even in class, people would see my duffel bag and ask me if I played a sport, so I made friends that way and my professors paid more attention to me because I was on the team. They would ask me about the games and come to the games, so that was cool.”