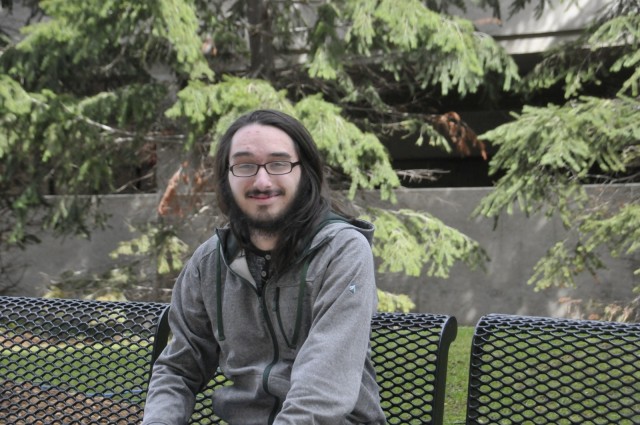 I can remember the first time I stuttered at 10 years old. It caught me completely off guard. I was so used to being able to speak fluently and normally that I didn’t even think that it was possible to speak any different. I recall my mom being aware of it immediately and asking me if everything was alright and why I struggled. I didn’t have much to tell her other than I didn’t know.

I wasn’t born with this problem. I can still remember a time when I was able to speak clearly without any issue. Those were probably better days, but back then I wasn’t old enough to really consciously make friends or right and wrong decisions. I just kind of did my homework, and stayed home every day finding something to do in video games. Around fourth or fifth grade, I started to notice my stuttering impediment show its face. Mom did too, so did Dad. I think after a while, my brother Eli did, too. It evolved from being able to say a few sentences to Mom and Dad to trying my very best to get a paragraph out to my parents over the new game they got me, or how bad my day was to me, or how much homework I had, without losing my breath.

The first thing my parents did was send me straight to speech therapy, lessons on how to properly pronounce words and sentences, how to sound them out and make it easier for your brain to create words. When I was young, it sounded incredibly stupid. Why would I ever need to take classes for something that I already knew how to do prior to having this problem? I guess I was just so used to speaking fluently that I guess I never thought I’d need to remember how to pronounce syllables right.

I had speech about two times a week and it took me out of some of my boring classes that I hated in school. It was actually a point of excitement for me during the week. The lessons were often very engaging and fun to be in and we ended up always playing a game at the end if I did well enough, and that alone made me want to do as best I could (which I did, I always did).

I didn’t really get bullied for it too much in grade school, but that was mostly because I could practically do everything by myself and not talk to anyone. In middle school it was a lot different. Middle school is just a bad experience for almost everyone, but the bullying really started there. Aside from the occasional “stutter face” insult I got by the “cool kids” in grade school, I was picked on by the middle school kids a lot worse. I’d say it was probably the hardest two years of my life in school up to that point because of how group-dependent a lot of the school work ended up being. I was still this super shy and antisocial kid that couldn’t speak worth a damn. It ended up getting so bad that the teachers would hesitate to pick me when I had my hand raised to answer questions, on the rare occasions that I even raised my hand.

Needless to say, school was not good to me in seventh and eighth grade. Kids would exclude me from hanging out with them and talking to them was so much of a chore for them that they just would try their best to not even speak to me at all. Teachers got so fed up with my stuttering, especially in English class, that I was being marked down in presentations for stuttering. I always ended up getting a lower grade than others in presentations even if mine was better than theirs. I always told myself that talk is cheap to make myself feel better.

Oddly enough, the real pain didn’t start to set in until high school. High school was a lot easier for me as far as socializing goes because everybody was a lot more accepting. But it was still hard. Communicating was still just as much of a chore as it ever was. During my first year of high school it was nearly impossible for it take me less than 10 minutes to get through a single thought. People would often get so tired of me talking, especially when they already knew what I was going to say, that they would very frequently finish my sentences for me.

Funnily enough, I was often told by some of my favorite teachers that if I didn’t have the stuttering issues I do that I would easily have the best reading voice. I’ve been told that I’m a very dramatic person. I would agree with that. I’ve also been told that I have an excellent ability to read in different tones. I don’t just read in monotone, I read with different voices in my head and make different sounds for things in books. I think it’s hilarious and oddly enough so did my teachers. After a while I managed to get a edge up on the competition thanks to a note from my speech therapist to all of my English teachers telling them that they cannot down grade me for stuttering during presentations anymore. I was relieved that I would no longer have 10-point deductions because I tripped up on a word.

Unfortunately, during my second year of high school the loneliness started to kick in and the self hate started to grow. I started to hate myself for having this disability and inability to speak right. Even with all of my training, I still wouldn’t speak to practically anyone at school and I would only speak when spoken to. I started to question myself and doubt my worth and existence because I was so shunned and cast out because of my inability to speak. In this world, being able to speak your mind fluently and quickly means everything. Many don’t take it for granted, but being able to speak fluently means so much to me and others like me that we might pay anything for the ability to. We stutter, we clack our teeth, we start to twitch, we grind our teeth, bite our tongues, we can’t even move correctly. It’s a nightmare for all of us when we try to desperately fit in both at home and at school or out in the world.

Thankfully, in my third year, things started to look up for me. I’m not sure what happened to me but a lot of my shyness and self loathing went away, and my confidence skyrocketed. It was so strange being able to fluently speak almost every sentence and word again. I felt so overjoyed that I was able to finally fit in with some groups, so much that I started to attend Gamer’s Club again and started to attend Multicultural Club. A turning point that year was at the annual international fair where I led one of the stands and taught people about England with my best bud, Alistair, by my side as he handed out biscuits and tea to people.

In my fourth and final year of high school my ability to speak right went down again, but no fear because I took a drama class. It was the first time I took a drama class and it took me out of my comfort zone and let me become animated. I’d always wanted to act a little bit, I’ve always been an animated person at heart, acting out certain movie scenes that I liked and throwing out emotion. For my final grade I had to practice and recite a speech from a movie or game that I really liked. I picked the one that I wanted out, it was a speech that a Jedi Master gave to the other masters at the end of an amazing game where she defends her student and saves him at the end. It was really complicated and difficult. I went first on the exam presentation day because I was so confident and talked my heart out. My drama teacher told me he had never seen a more well performed final exam piece and told me that my stutter was almost undetectable.

I ended up graduating high school and the bullying stopped. I didn’t see most of my friends from high school for a long time until I started going to Grand Rapids Community College and took a few classes. The stuttering issues persisted through the years of not going to school. I ended up taking a near two-year break from school and did not take any therapy classes. Then I went back to GRCC for a few classes. During those two years a lot of my training was forgotten but oddly enough I think I’ve done a better job at understanding how to speak properly than in the previous years. It’s still very obvious during class when I’m trying to give out answers or when I get nervous.

I think I can say that stuttering has bettered myself over the years. It’s made me realize that everyone has a weakness of some sort and you have to overcome that weakness to be better, to forever etch your mark on the galaxy.

I think what people ultimately have to understand is that stuttering is a work in progress for most of us. It is for me too, I still struggle with getting it to stop and getting myself to apply the lessons I’ve learned over the years. Speech therapy has helped tremendously. The issue, for me anyways, will always be trying to apply the techniques I’ve been taught in the moment I need them the most. Everybody that stutters struggles with different things. For those that are looking at us from the outside in, just try to understand that we’re working on it. We’re trying our very best to make sure that you can understand us clearly and quickly.Believe me, we also have better things to do than stutter step over our own words. I hope people can try to remember that when they listen to us, we’re trying our best, and please don’t finish our sentences for us.