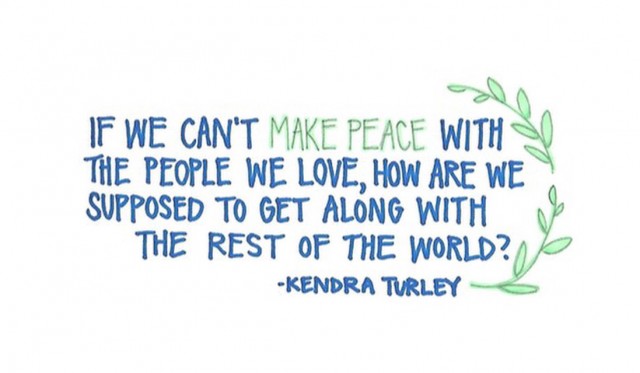 November 9, 2016 was a hard day for me, just as it was for many others. Along with suddenly having a president who clashes with my own personal views, is perceived as a threat by my LGBT friends, and having to figure out how to handle the next four years in the U.S., I had to determine how to speak and what words I would say to my best friends.

Three of my best friends are hardcore Republicans, which I have known since I first became friends with them. We all learned with this election that politics were not a healthy topic of discussion, and if we did have to talk about it, we would do so quickly, calmly, and civilly. On election night, at 12 a.m., when the group chats between all of us were spewing nothing but hatred for Donald Trump, I felt awful when one of those friends sent a quick, sad text and proceeded to leave the conversation. When I scrolled through Instagram at 2 a.m. to take a break from election coverage, I saw that another best friend had posted a black screen. His caption was sad, and read that he felt as though he couldn’t celebrate Trump’s win because everyone else was busy mourning and grieving and showing him it was wrong to be happy. He couldn’t show his excitement for someone he supports and believes is the most qualified to be President, and I felt awful for him.

Now, I’m not saying I support Trump. I never have, and I never will, for countless reasons that have already been named by many protesters, celebrities, and leaders alike. But while I do not support the current president, I do support my friends, regardless of their political views. I want to show them the same love and kindness that I always have. I want to show that same respect to everyone, as long as they agree to do the same for me. Unless someone is trying to control my opinion and tell me what to believe and why my own political views are wrong or becoming politically violent towards me in some manner, I have no reason to be mean to someone even if they do support Trump.

And even if someone is getting in my face and trying to tell me what I should and shouldn’t believe, I don’t plan on starting any fights. Fighting is not going to resolve the situation. Fighting and sitting around and just being angry will not fix the problem. I recommend that one should remain civil, and simply do their best to close the conversation and walk away.

I know that it is hard to keep quiet when someone is making fun of or scolding you for your views and beliefs. But if you really want to keep that person in your life, find a solution, and keep them as a friend, the best option is to change the subject of conversation. And if it’s with your best friends, like me, I suggest making a rule to not discuss politics with each other. I know for me personally, I found it easier during the election season to talk to my friends without fear of saying the wrong thing or starting an argument since we all agreed from the start not to talk about abortion, healthcare and global warming or anything else controversial.

More recently, after Trump’s inauguration, we all agreed that if we’re going to discuss our political views, we can do so calmly, and civilly, and respect each other’s thoughts and beliefs. Close friendships are built off of trust, love, and respect, and how are you supposed to maintain that if you can’t express your true thoughts without fear of being shot down?

I’ve also found that if my friend starts posting on social media pictures of his Trump shirts and about how happy he is with a decision Trump has made, I just scroll past. It really is quite simple to just ignore the posts and leave them alone. Social media is a way people use their freedom of speech. They shouldn’t be shot down every time they post their opinion, especially if it’s something that makes them happy

With tensions rising all across the country as people continue to butt heads over President Trump’s policies, orders, and decisions, it’s now more important than ever to keep your friends close, especially those with differing opinions. Because if we can’t make peace with the people we love, how are we supposed to get along with the rest of the world?