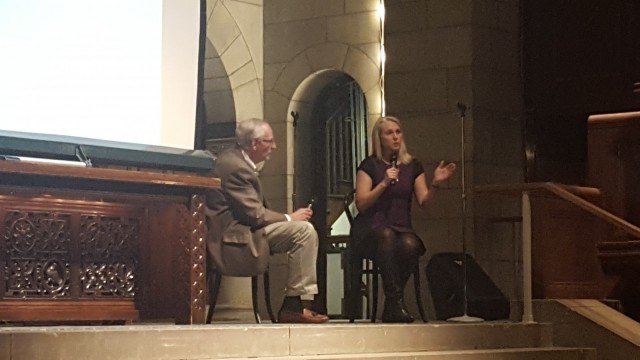 Piper Kerman, author of “Orange is The New Black,” joined the non-profit organization Humanity for Prisoners at Fountain Street Church in Grand Rapids on March 7 to talk about women in prison.

HFP Founder Doug Tjapkes was the first to stand at the podium and explained that  HFP is the only organization in Michigan that works one on one with prisoners. HFP is now working with around 300 prisoners.

HFP tries to prevent abuse in prisons between inmates and officers. They also try to help the inmate when they are released because many don’t have a job, a place to stay, or even clothes.

Kerman started her lecture by explaining why she was arrested. Kerman was indicted for money laundering for a heroin dealer in 1998 and was sentenced to 15 months. In 2004 She was taken to a minimum security prison called Danbury Correctional Institute in Danbury, Connecticut.

“I walked through the gates of the prison alone and words can’t describe how scared I was,” Kerman said. “But when I walked into the place where I would be living, the women there greeted me and asked if I had everything that I needed because the prison wouldn’t provide any toiletries.

“It wasn’t a dog-eat-dog society in the prison,” Kerman said. “The women I lived with had so much personality and were so amazing. They helped me survive and I am eternally grateful to them.”

Kerman served 11 months in the Danbury Institute and was transferred to Chicago to serve the remainder of her sentence. Kerman served 13 months of her 15 month sentence and was released in 2005.

After talking about her life in prison, Kerman addressed the justice system. She said that prisons and jails are only used as a tool for social control.

She continued to talk about justice system reform that needs to happen. For example, she said incarcerating a mother costs about $60,000 a year and this amount doesn’t include foster care for their children. However, if the mother is allowed to serve at her home and still take care of her kids it would cut the cost in half.

She spoke on racial equality as well.

Other topics included the reform or abolishment of children in prisons, false convictions, helping released inmates and many other things.

In Kerman’s lecture, she said that when she was released, she was hundreds of miles away from her home, only had $28, and the only clothes that she was given were a pair of mens clothes.

Luckily for her, her husband came to get her and brought her clothes. Although Kerman could easily go back to her life in New York, many other released inmates can’t. About 700,000 people are released from jail without a secure future.

Kerman told a moving story of a woman that she used to room with in Danbury. The woman, nicknamed “Pom-Pom,” was released before Kerman. Later, Kerman received a letter from Pom-Pom saying that she was staying with a relative who didn’t want her there. She didn’t go outside because it was a dangerous neighborhood and because she didn’t have a jacket. Pom-Pom told Kerman that she missed her and that she wanted to come back to the prison.

“After reading that letter, I just started crying,” Kerman said.

“After hearing Piper talk about the letter she got from her roommate, I was very moved,” said Cheryl Chambliss of Grand Rapids. “It was a reminder that we need to push for justice reform.”

“Orange Is The New Black” was published just five years after Kerman’s release. Kerman explained that she experienced many of the things that occurred in the book. She titled her book as a satirical remark to the 650% increase in incarcerated women in the past 30 years.

“Women are linked to fashion and there’s always a “This is the new this” in fashion,” Kerman said. “So I thought that I would title the book Orange Is the New Black.”

After her lecture, both Kerman and Tjapkes answered questions from the audience. Many spectators asked how they could help improve the justice system.

“To get involved, you first have to get informed,” Tjapkes said.

“I thought it was fascinating,” said Kimberly Stapert of Grand Rapids. “It went more in depth than what I anticipated and I’m definitely going to spread the word about what is going on in our prisons.”