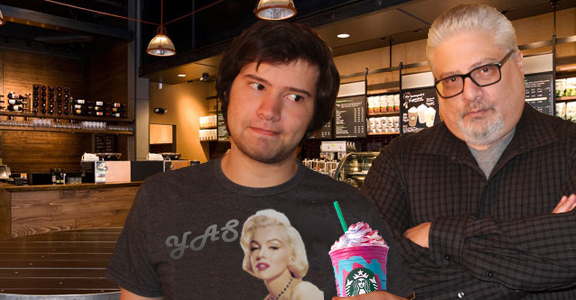 America’s number one invasive species “Starbucks” had a promotion with a new drink. You’ve most certainly seen the “Unicorn Frappuccino” by now. If you managed to put “Yass Kween” into a blender and charge five bucks for it, this would be that drink. With bright colors that would give even a rave party a seizure, and topped with glitter. That’s right. Glitter. If only I could have been there for that business pitch. I imagine it went along these lines:

“You know what people need with their coffee? Some nice glitter!”

“Isn’t that the stuff that gets stuck to everything?”

“Aren’t you that homeless man who lives in the box across the street?”

“Yep, but you left the door open. So are we doing this?”

My Father raised me on simple morals. That men drink their coffee black. Any cup of coffee with cream, sugar, or an adjective in the name was not manly. No Mocha Explosions or Glam-uccinos in this family.

However, the sugary coloring of the drink tempted me to no end. I needed to know what this fab-tastic (the only word I could think of when seeing this beverage) drink was about. Plus I’ve always wondered what unicorn tasted like. I imagined like goat, but more magical. I took a sip and felt my world change for the better. I was disappointed once I learned that the drink was not made from actual unicorn, but some animal called “artificial flavoring.” However, I couldn’t help but have this feeling like my dad was ashamed of me. That he was rolling in his grave the moment I ordered this drink. Well…he’s not dead..he’s very much alive…probably complaining at a Denny’s right now. But ya know…it’s a saying. The point still stands…if he ever knew I ordered this drink he would take away what little I have left on my man card. I’ve already lost enough points after watching Beyonce’s “Lemonade.” That Girl. Can Werk. Don’t tell my father I said that.  You may not be able to order the unicorn frappuccino anymore, but you can still ruin a barista’s day by ordering off the secret menu.