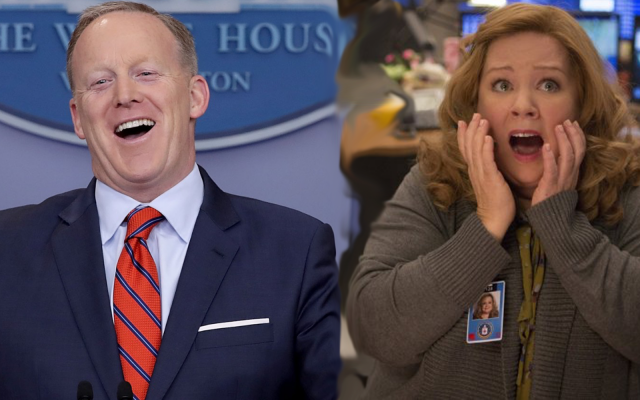 It’s moments of true darkness, and hopelessness that bring us together as a country. The other day we just had one of those. No, not that Sean Spicer quit, that makes perfect sense. We just lost the best Melissa McCarthy performance since the time she acted like she enjoyed the script of “Mike & Molly.”

An era of great humor looks like it’s at its  end. However, by using the political analyst skillst I picked up watching YouTube, I am able to predict what is to come during these troubling times.

Sean Spicer was a liar. I mean. Duh. But specifically for saying he thought the academy award nominated actress’s performance of him was, “silly, malicious.”  My theory states that he loved it so much that he quit his job to pursue a new TBS sitcom where they are both Sean Spicer called:

“Mr. & Mr. Spicer” a modern day multi-cam show, where the White House isn’t the only place where Spicer loses control of a room. Now he has to manage being married to another man (Melissa Mccarthy) who bends the truth as much as he does.

Sean Spicer: Were you at the club last night?

Melissa Spicer: No honey! I’m telling you the truth.

Sean Spicer: I saw on your twitter that you went “Clubbin with the boys.”

Melissa Spicer: I know what that looks like, dear, but it was a rogue tweet to distract ISIS.

And don’t even get me started on the episode where Sean Spicer bands cameras in his house. If an executive producer hasn’t been assigned yet, then I personally volunteer myself. TBS, I’ll accept my first paycheck next Tuesday.

Maybe Sean Spicer was right. Melissa Mccarthy was silly. Because acting is silly. It’s not real enough. Which is why I predict he is going to team up with her for a new cooking reality show titled “Spicing It Up – With Spicer.”

Get ready for the Emmys to be flowing in for this new network ABC show. Sean Spicer knows how to cook a steak thanks to his former employer Trump. (They are simply the best steaks. Simply incredible.) This show will range from the “Jeff Sessions is a Chicken” dish, to pouring a nice cup of Covefe.

That’s right, my theory is that Spicer & Mccarthy are gonna hit the road to form the next big hit. “The Spicer Girls” cause…come on. The joke is right there you guys. I will be personally shocked if I don’t hear a cover song of “We’re not gonna take it” from this duo.

The band would tour in all American states that voted red in the electoral college. In each one debuting a brand new hit single.

All of this would of course debut on the smash hit album they would later release that year, “Now That’s What I Call A Rigged Democracy,” for all the “loser” states that voted blue who won’t get to see this live.

Literally nothing will happen. This was just a political move that Spicer made because the job was too much to handle. The most boring of the theories and one I hope is not true is that Spicer just couldn’t stand the job, and was close to being fired. He faced pressure to either leave on a good night, or to be kicked out of the White House.

Melissa Mccarthy will make one more appearance as Spicer, then retire the role to move on to other roles as most actresses would. I truly hope this is not the outcome as there is sitcom and reality gold out there for you two, and I beg you to look into it. The future of entertainment depends on it.

Local GRCC Alumna and Instructor will Compete on Food Network