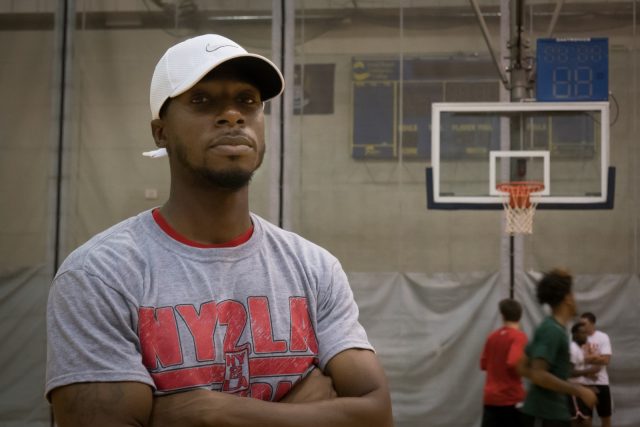 Derrick King was brought on board as a volunteer assistant coach for Grand Rapids Community College men’s basketball team late last month. He is now the latest addition to the four-man coaching staff.

He is a graduate of Creston High School, and went on to earned his bachelor’s degree from Davenport University in Human Resources and got his master’s degree from the University of Phoenix in Business Administration. King and his wife of 15 years have three children.

King served as the Director of Basketball Operations of Michigan Basketball Academy (MBA) for a year and a half. While as director of MBA, King planned all of the camps, clinics, leagues and tournaments for the AAU program. He recently resigned as director of MBA because he was pursuing his passion at coaching at the next level.

But he has a story that’s deeper than just his coaching experiences and success.

King’s love for basketball came at a young age, but it didn’t necessarily come from just the love of the game. It came from household troubles that he witnessed first hand.

“I first picked up a basketball when I was about 11 years-old,” King said.

His motivation to pick up the ball didn’t come from usual aspirations to be in the NBA, it came from his desire to escape, what at the time was, his toxic household.

“My motivation for playing basketball was to get out of my house,” King said. “It was a need, it was a necessity, it was a way out.”

King is also the director of a high school basketball scouting service, West Side Report, that is partnered with Michigan Sports Radio. West Side Report focuses on scouting talent from Lansing all the way to the Lakeshore area and makes sure that college coaches know about talented athletes here in West Michigan. King also mentors the athletes to help them be more prepared when it’s time for them to be recruited.

King first started playing organized basketball in the seventh grade for Riverside Middle School, then he transitioned to playing for the YMCA league. Then from there he went on to play high school ball at Creston High School. During those young days of playing basketball, King had coaches along the way that gave him that father-figure like influence that he needed.

“Some of the coaches I played for that impacted my life was my very first coach, Mr. Ware, Jim Zapata and my high school basketball coach Earvin Pratt,” King said. “Those guys poured a lot of time into me. Mainly coach Zapata, my coach at the YMCA, because he was the one that picked us up, dropped us off, took us to basketball games, fed us, did everything that a father should do for a kid.”

King lived a life no one would’ve predicted a young promising high school athlete would be living. Not staying in his household for a long part of his high school career, King hung with friends who ultimately made the wrong decisions, that led them to being incarcerated. From that moment, King found himself homeless on the Northeast and West Side of Grand Rapids. He slept in cars, lived in shelters, slept under bridges, and at that time he was alone.

“It was very difficult coming up in high school,” King said. “I had some friends that made mistakes, and they ended up going to prison, so I kind of ended up alone at that time.”

King subjected himself to homelessness because his mother was on drugs, while witnessing and experiencing the difficulties of growing up in an unstable household and refusing to go through that mental trauma, he decided to go out into the world on his own.

King got over his homeless situation during his junior year of high school. He was still playing basketball at the time, then in his senior year he upgraded his life from having no home at all, to having his own apartment, two cars, while now supporting two children. All the while he was still managing to play on the high school varsity basketball team.

But as things seemed to going in the right direction, King’s basketball career took a hault, as he was cut from the team his senior year. Even though it surprised him, it didn’t stop him from graduating from high school on time and playing college basketball at Northwood University, as a walk-on, for one year on the practice squad before transferring to Davenport University to finish out his college career and to be in Grand Rapids with his wife and kids.

Through all of adversity he faced at a very young age, all the way through his high school days, King still managed to get through it. He credits his faith with getting him over the hump.

“God, favor, and having good people around me,” King said. “Also, I just stayed the course, and did the right things. At the time I had two kids and I didn’t want them coming up the way I did.”

After graduating from college, King fell into retail sales, and banking and mortgage businesses, but then he found his niche, which was talent acquisition. While King was going from job to job, he was also coaching for basketball teams. He started out coaching middle school basketball and then went on to coach high school basketball at the junior varsity level for East Grand Rapids for eight years. Following his tenure at EGR, he transitioned to coaching at Grand Rapids Catholic Central.

Outside of being a director of his own scouting service, and now as a new assistant coach, King has plenty of hobbies to keep himself balanced.

“I love to spend time with my family,” King said. “Another thing I love to do is workout. That helps clear my mind. I also hunt and fish, but traveling is probably the best hobby of mine. I love to see different places, different things, and different cultures.”

King’s coaching resume is continuing to grow and he is ready to take full advantage of this new opportunity.

“Luke, (the men’s head coach), gave me an opportunity to coach here,” King said. “Here at Grand Rapids Community College, I’m pursuing my goals, which is to coach at the next level.”

King has a new vision for himself as he looks ahead to his first season as a college coach.

“My ultimate goal is to solidify myself within a college program,” King said. “I want to make sure I’m sharp at what I’m doing (coaching) as I continue to climb the ranks, because I want to be able to put basketball players in a good position to play at the next level and move on to become good people.”