About two years ago, my life changed in a way that I never thought would happen. I started dating a man who had two daughters. There have been times of struggle and times of joy but nevertheless it has made my life more significant by stepping into a parenting role .

I met my boyfriend, Omar, in the late summer of 2016. I did not like him at first because I thought he was arrogant. But after a while of getting to know one another, he started to grow on me. I was introduced to him by Tomas, a mutual friend of ours. Tomas invited me to go to Grand Haven for the day with him, Omar and a few other friends. We spent half of the day out there and then went to see a movie. Afterwards, Omar dropped me off at my mom’s house and I suggested that we should add each other on Facebook. After talking for a week, we decided to meet again and went swing dancing.

As we became closer he told me something that he thought it might scare me. He told me that he has two children. At first I was a bit shocked. I thought to myself, if you really like this guy and want to be with him, do it. I then replied, “When can I meet them,” which I think was a bit of shock to him.

A few weeks later, Omar decided that it was time for me to meet his daughters Julizia and Jazlyeen. He picked me up and the girls were in the backseat. We drove out to a park in Rockford and let the girls play and they were a little cautious about me. After a while of playing hide and go seek with them, I could tell that they felt a little more at ease with me being around. It took a few more weeks for the girls, Omar and I to get more comfortable. I understood that if Omar and I wanted to be in a relationship I had to accept that it would be a huge commitment. We were not going to have a relationship like every other couple our age who are in their 20’s and are either going to school or out enjoying their youth.  We needed to always put the girls first. We decided to make things work and along the way we had some very unusual and wonderful memories.

Now as a parent everyone knows that the first time your child goes to the hospital  it is a nerve-wracking situation. I felt just the same for my boyfriend’s child. Last year, Jaz and her grandpa were playing tag inside. You think no one will get hurt everything will be okay… not with Jaz. They were running around in the living room and as Jaz ran around the couch she fell head first on to the table, which resulted in  a huge gash in her forehead.

Omar and I quickly drove home, put Jaz in the car and drove back to Grand Rapids to the Helen DeVos Children’s Hospital. Jaz got a few stitches and she was completely fine throughout the time at the hospital.

One of the things that makes me happy about being in a relationship with a guy who has children is the way I have made an impact on Juli and Jaz and how they impacted me. The first time the girls called me “mom” it almost did not click in my head right away. It took me awhile to get used to it but now I felt that I was fully comfortable. It was something I have always wanted, to be a mother or in this case taking part in a parenting role. Each day I am always happy to do homework with Juli or watch movies and read with the girls before they go to bed. One of the biggest struggles is trying to influence them positively while I am working on myself. One of the most complicated things within our relationship was telling my parents about the girls.

Omar and I kept it a secret from them for almost a year. We were both unsure about how my parents would react since he was 21 and I and only 19. When we finally did tell them, my mother was a little shocked and asked questions about when he had his children, who their mother was, and why we didn’t tell her sooner. I told her that it was not my decision to tell her. A few months later we told my father. He was surprisingly calm and said, “Is that it?” which was quite a relief for us, and we felt like we could have told them sooner.  He surely asked a few questions like my mother but it made Omar and I happy that we told them. Ever since then my parents have been more accepting of my life choices and how the girls are a huge portion of it now. Omar, the girls and I spend time with my mother and father during the holidays and for activities.

Something else that has been kind of hard is telling others about my life. Since I am 21 now, it is not common for people my age to be in a relationship with a person with kids. When I tell people about my life  with Omar and the girls they seem a little shocked. At my age people who are in a relationship are able to do anything they want instead of worrying about picking up kids, or getting them into bed on time.  Most people do not realize that I choose this life, I was not forced into it. It gives my life more meaning and happiness.

Although my new life can sometimes become a struggle, I would never change it. I am always reminded that without meeting my boyfriend and his two beautiful daughters I  would not be the person I am today. I have become more patient and understanding about others’ life choices. Julizia and Jazlyeen have given me more joy to help me go through each day. Going home each day after school or work and seeing their smiles as they run towards me makes my day happier. 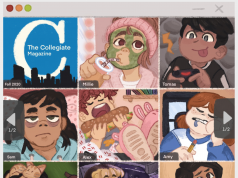