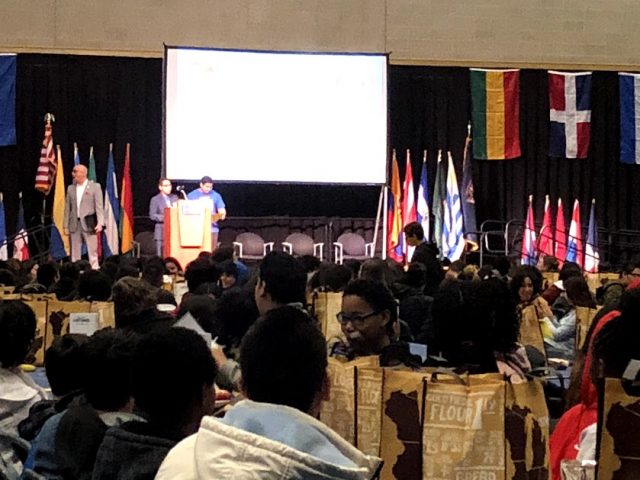 The conference is held annually to motivate local middle and high school students to accomplish their academic and career goals.

This year’s theme, “The Power of Dreams|El Poder de Soñar,” focused on just that with keynote speaker, Sammy Publes. Publes shared his remarkable story of struggle, perseverance, and redemption during his speech to the crowd of students.

Prior to the conference, Publes sat down with The Collegiate to share his expectation for this year’s conference.

“These kids need someone to look up to,” Publes said. “Maybe that’s not me, but maybe they identify with the struggle that I had and the things that I had to get over to get to where I’m at and hopefully that gives them inspiration that every day is a new chapter. Your story is not written yet and everyday you have the chance to write something new, so hopefully today is that day and that’s something beautiful.”

Publes also shared his determination to achieve his own goals.

“It’s a long process to get here,” Publes said. “I definitely celebrate my wins, but I still have so much more to do that I’m like, ‘Oh yeah thank you, but what’s the next thing?’ In this business, acting and theater and all of that stuff, you kind of get caught up in that mentality… thinking about the future and stuff.”

Still, through his many successes, Publes remains humble and connected to his roots.

“It’s kind of weird because I (question) why me, you know,” Publes said when asked about how he felt about being asked to speak at the Latino Youth Conference. “I just kind of felt like I’m not dead yet to get that lifetime achievement award to get that congratulations. I’m still working, I haven’t achieved everything that I want to achieve yet, so that’s why it feels a little funny because I’m still in the struggle. I’m still in the journey to get to where I want to be.

Publes began his speech with inspirational words for the students in the crowd.

“Be proud of your history not only as Latinos or Latinx-ers, but as humans,” he said. “Always seize the moment because if you’re prepared, and you’ve listened, and you’ve paid attention there shouldn’t be a problem.”

Publes went on to share his family’s story and how they emigrated to the United States. In 1979, Publes’s father was imprisoned for 20 years after being caught in an attempt to escape communist Cuba in search of a better life for his family. After many trials and tribulations in the years that followed Publes’s father was released five years later and eventually they were allowed to leave the island due to Publes’s father’s political prisoner status.

Through the years leading up to his success, Publes faced adversity. At first being faced with a new language and culture, later being sent to an alternative school due to behavior issues, becoming a young father and dealing with addiction. Through it all, Publes credited his high school teacher, Jacquie Friend, as his “high school savior” for giving him an outlet to express himself through acting and turn his life around.

Eventually, Publes found acting as his saving grace. Now he owns the theater company, “Mixed Roots Collective” and continues to act in films and TV.

During the conference, the 2018 scholarship recipients were announced. Receiving the Gil Guzman Academic Progress Scholarships were seniors, Ruby Santoyo from West Michigan Academy of Environmental Science and Anahi Villarreal from the Grand Rapids University Preparatory Academy.

The students in attendance were pleased with the conference and its mission.

“I thought it was encouraging, inspiring, and it was helpful,” Lopez said. “It made me want to focus more on school.”

Garcia agreed, adding, “It made me want to focus on school and to grow up to be successful.”

Javier Cardenas, from Burton Middle School, took away life lessons and motivation from the conference.

“I came here thinking it was just going to be a bunch of stuff I already know,” Cardenas said. “But no, I actually took something from today. This Latino youth is something that’s really important. I hear the testimonial of their lives, the speaker we had, they didn’t have an opportunity to do anything that we could do. I took this as persistence. The only way that you’re going to reach your goal is persistence.”

Cardenas plans on attending GRCC after high school graduation and has a plan to “go farther than my ancestors could go and show that anybody can do it. The only thing stopping you is you.”

Francisco Ramirez, one of the organizers of the Latino Youth Conference and Hispanic Student Organization Advisor, shared his views on the importance of the conference.

“Coming from someone who attended this (event) it’s great to see people… returning now as professionals continuing to support the purpose of this event which is to empower, encourage and motivate young Latino students of West Michigan to pursue higher education, pursue their dreams and make sure that we create this open access,” Ramirez said.