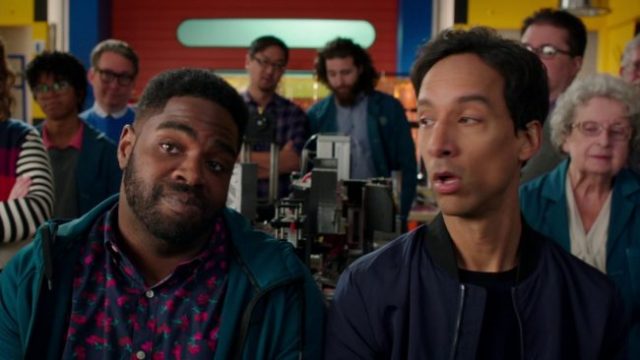 Ron Funches is a comedian, actor and writer from Chicago, Illinois. You might recognize him from NBC’s sitcom “Powerless,” a comedy of ordinary citizens within the DC comic universe, or recognize his voice from Dreamworks’ animated feature film “Trolls.”

Funches is currently performing stand-up around the United States and will be performing at Vander Mill tonight for LaughFest. Before his flight to Grand Rapids, The Collegiate was  able to get a phone interview.

This is your second time performing at Gilda’s LaughFest. How was your first experience?

Have you taken visits up to Michigan before?

“Well,yeah! I used to do a show called “Undateable” that was in Ferndale, Michigan, and I got a lot of Michigan fans from that. I’ve done a lot of shows in Ferndale and around the area. I just usually have a good time in Michigan in general. I’m from Chicago, so it’s part of (the) Midwest area.”

What did you think of your experience on NBC’s “Powerless”?

“It was very fun to be a part of a DC comic property. I’m a big nerd myself, so that was awesome. It was fun working with people like Vanessa Hudgens, (Danny) Phudi, and Alan Tudyk. I learned a lot.”

Now that “Powerless” is over are there any other superhero properties you’d like to jump on board with?

How was it adjusting from performing comedy in stand-up to TV?

“I mean the biggest adjustment is that with stand-up you’re talking about the world, and with acting, you have to live in it. I have to go to acting classes, and I do it. I’m still scratching the surface. You have to treat it like a separate craft.”

What are some things you enjoy doing to treat yourself?

What is some advice you’d give to anyone wanting to pursue comedy as a career?

“Just love what you do. ‘Cause it’s a job you have to do every day. There are good days and bad days, so you better love your material. You gotta be your biggest fan and just know that it is a job, and you have to treat it like a job. Sell your craft, do the hard work. Don’t just get drunk and party all the time, you gotta be a professional it’s not the 80’s anymore.”

What are some of the current projects you are working on?

Funches will be performing tonight at Vander Mill, 505 Ball Ave NE, Grand Rapids. With one show at 7 p.m. and another at 9:30 p.m. For information on tickets visit LaughFest.org.
For a look at some of Funches’ stand-up comedy, check out his performance on “The Tonight Show With Jimmy Fallon” here.