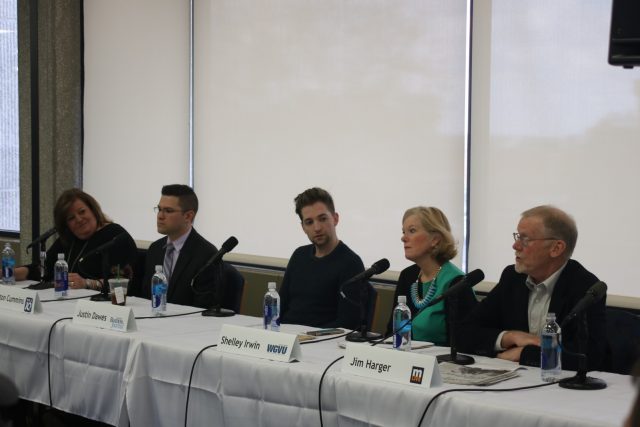 The panel featured Catherine Behrendt, who has worked at WZZM-13 for over 30 years, GRCC alumnus and Anchorman at WILX News-10 Clayton Cummins, GRCC alumnus and Business Reporter Justin Dawes from The Grand Rapids Business Journal, Barton Deiters from WOOD TV-8,  Jim Harger who worked in the journalism industry for 42 years is currently working MLive and WGVU radio host Shelley Irwin to discuss how fake news has impacted their careers.

GRCC adjunct Journalism professor and former Grand Rapids Press reporter Jennifer Ackerman-Haywood moderated the discussion and started off by asking the panelists what fake news was to them.

“Fake news is, in my opinion, information with which you disagree and you do not have an argument to articulate your disagreement and so, therefore, you slap the easy label of fake news on it, just like our president (Donald Trump),” Harger said.

Irwin turned to the internet to define fake news.

“It was the 2017 word of the year,” Irwin said. “Academically, fake news is news stories or hoaxes that deliberately misinform or deceive the audience.I am a Facebook addict. Of course, I put that question out. Here’s an answer: fake news is a neologism. It is often used to fabricate news. This type of ‘news’…found in the traditional news, social media or fake news website has no basis in fact but presented as factually accurate.”

With many people becoming corrupted by fake news it has become more difficult for journalists to do their job without dealing with the fallout.

Cummins shared a personal account of passers-by ignoring him because of his news station affiliate.

“I was doing a story about car insurance rising, I was at a rest stop near Williamston on I-96 and it’s just my camera one shoulder and mic in the other hand and asking folks, and I say, ‘do you know your car insurance is going up?’ And first of all they think they see Fox and they think that ‘Oh you’re from Fox News is fake news’ but we are a Fox affiliate,” he said. “There are some people that will just ignore me, they’ll look and walk past, there are folks that just will (say), ‘you’re just the fake news,’ and keep walking… I find myself having to explain and feel confidence almost in the fact that what I am saying is true with some people in order for them to talk to me.”

When Ackerman-Haywood asked how fake news affected their job as journalists, many of the panelists said that they felt more pressured to check their facts.

“I am not a breaking news platform but if something comes up and then it looks like it’s hot and needs to get, out the days are gone where you are just pushing a button and sending it out and you have to take a breath and check the source,” Irwin said.

As a journalist, it can be difficult to cover an event and include only factual information while readers consider it to be fake news because it doesn’t line up with their personal beliefs.

Deiters said: “90 percent of the time when people say there is bias, the truth is that their bias hasn’t been reflected when reporting.

Likewise, Behrendt said it can be hard to please readers who consider the story to be biased.

“I think a good day is when I am accused by both ends of the spectrum that I am biased in the opposite direction,” Behrendt said. “Job well done. If everyone thinks I am telling something that is different than what they believe.”

The discussion panel concluded by opening the floor for the audience to ask the panelists questions and career advice for those who are interested in going into the journalism field.

Some of the advice that the panelist relayed was that you must have a passion for journalism and although it may be a competitive field if you have the motivation to succeed you will accomplish great things.

“Passion, you have to have a passion for this business because it’s tough, long hours. You have to really love what you do to be able to do it,” Cummins said.

Harger said hard work will pay off in the end regardless of where you start out.

“My first job out of college was at minimum wage,” Harger said I was pleased, I was happy because it was something I was burning to do. This was my calling. My minimum wage job that I started right after graduating from four years of very expensive college. I was thrilled. Forty-two years later, I can retire and it’s been a good career. I haven’t gotten rich but it’s paid my bills and that’s what I hope for a student that’s somehow this industry, it’s calling, will allow you to continue to pay your bills”

Today’s panel concluded the GRCC library fake news series for the year by allowing journalism professionals to share their experiences with students and aspiring journalists.

The pandemic isn’t over, but art fans are returning to Grand Rapids for ArtPrize 2021

The pandemic isn’t over, but art fans are returning to Grand...