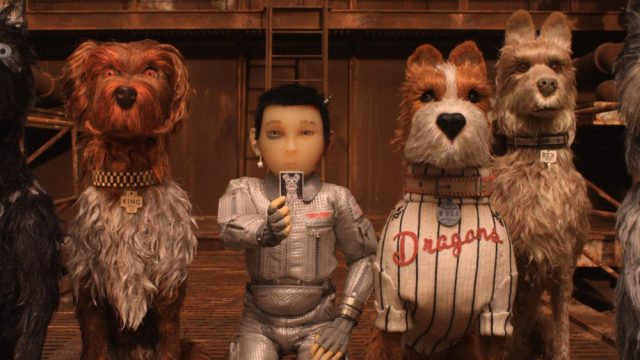 Many individuals often have their own opinions on the style of director Wes Anderson’s work. Some may say it’s the equivalent of giving top star talented actors Xanax before walking on screen (Those people may also be me). However that is not always a bad thing, in fact, I find Anderson’s style to be very soothing, and that dry sense of dialogue makes his jokes more hilarious. The contrast of deadpan meeting his sense of bizarity makes for hilarious timing and unique dialogue. “Isle of Dogs” meets that style, and goes above and beyond.

“Isle of Dogs” follows the tale of an outcasted society of stray dogs, after being banned from a large city in Japan with its own agenda. Trash Island presents massive environments, and all of them are gorgeous to look at. Which seems odd coming from an environment called “Trash Island,” but trust me there are locations you won’t want to leave in this movie. The world the animators made takes their work in “Fantastic Mr. Fox” to a whole new level. Take that George Clooney! You had it coming! (Just kidding Mr. Clooney please return my emails.)

The dog characters are all as loveable as your actual pets, and Anderson does a fantastic job displaying a large range of dogs based on many attributes these critters have in real life. You’ll want to hug all of them. My biggest gripe with the dog aspect of the story is we didn’t get enough of them, or get a chance to explore all of their characters as much as the script could have. Bryan Cranston’s character, Chief, is always the main focus of the story, but his dog counterparts usually get sidelined or under explored in exchange for the political side of the movie back in Japan. Chief’s romantic interest, Nutmeg, (voiced by Scarlett Johansson) gets one scene in the beginning, and doesn’t show up again until the end. This doesn’t harm the story, but instead leaves you with a feeling of “Oh…so that’s it, huh?”

There is a moment toward the end of the movie that tries to be extremely emotional. It’s not like Anderson is trying to make you cry, but if we spent more time with the characters applied to the scene we might actually feel something. The dogs and their world are the strongest characters within the story, walking out of the theater there is a feeling that they could have done more than just focus on Chief and the Mayor’s nephew.

Like I mentioned, the political story does get a good amount of attention within this movie. And get ready to put on your barrets and order your coffee with almond milk ‘cause you are about to feel artsy! Every character that exists within the city speaks Japanese with barely any translation. Unless there is a natural reason to translate these characters then the movie will use that, such as a reporter or electronic device. Some may see this as simply confusing, and to those I say…You are right! The true political workings of the story specifically may be lost on a large general audience, but the citizens in Japan using their native language actually doesn’t make the story impossible to follow.

Let me remind you that back in cinema’s introduction we used to tell stories with only pictures and maybe a few instruments if you are lucky. Movies don’t always require dialogue to tell a narrative properly. And this movie does a fantastic job reminding you of that, and it provides enough visual cues for you to get a grasp of what’s happening. I think this part of the story does share a fair warning…and if it sounds like a put off I still say…maybe give it a try? Totally up to you though, I don’t work for these people. (Unless Anderson gets back to me. Please return my emails.)

If you are not a fan of Anderson, trust me when I say this is not the movie that will make you change your mind. It’s about as Wes Anderson as you can get, and I believe it’s his best work at the same time. “Isle of Dogs,” although shares some story flaws, is a beautiful and extremely entertaining piece of work that explores the love of a boy and his dog (who happens to be voiced by Walter White himself), what more can a movie goer want? If you are a Wes Anderson fan, this is the movie you’ve been waiting for!

Rating: Nine out of 10 Jeff Goldblooms.