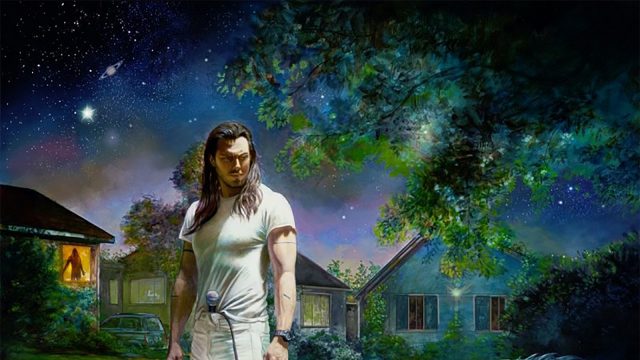 Last Thursday, famous musician Andrew WK performed to a sold-out show at the Pyramid Scheme here in Grand Rapids. WK performed his newest album “You’re Not Alone” as apart of his tour, and the Collegiate caught up with him for a follow-up interview with him after his performance.

How was your performance at Pyramid Scheme? How was it compared to your past shows?

Most of the time when we play in Michigan we play in the Detroit area so, getting to go back further west, and getting to come back out to Grand Rapids was something me and the whole band have been looking forward to for a long time. We specifically chose to not go back to Detroit for this particular tour and go to Grand Rapids instead. You know to mix it up and to give that side of the state a good party time as well! So it was one of my favorite shows.

When I first played in Grand Rapids it was a real high point – and this time with the full band (it) was also a new high point. And I really mean that. Cause I did not feel so great at the show the day before. Which was actually on my birthday and what not.

So it’s like there is a magical X-Factor you are trying to chase after. So sometimes there is nothing you can do to get to that place. It’s almost a cosmic coincidence when things align to make for the perfect party – and I think we got pretty close to that here in Grand Rapids.

Where did the title “You’re Not Alone” come from? Did it resonate from a real place?

It didn’t come from me. The title was actually suggested by my manager. So it’s not really what I would consider an interesting story – but sometimes when an idea presents itself it can be in a very unlikely way or in a very personal way. Other times ideas just come and someone else will just make a suggestion.

Do you have any favorite genres of music outside rock?

I really just like music in general. Genre identifiers are only helpful when it comes to trying to locate certain instrumentations styles and certain modes of delivery. Otherwise, I think genre is quite distracting, and can really distract people and move them away from the essence of the musical experience. I don’t think anyone wants to cut themselves off from the joy of music by using any formal organizational system beyond just as a way to define the feeling that you are looking for.

Certain kinds of styles may hit a specific kind of person in a certain way that they are looking for but – what I do think about music is – all music is music. Just like all movies are movies. Now you may like science fiction movies or you may like thrillers. They are following in that certain discipline right on the screen.”

And what projects do you have coming up this year, and 2019 onward?

I don’t really know. Just partying.
Andrew WK’s latest album “You’re Not Alone.” can be purchased in stores, and on music streaming sites.