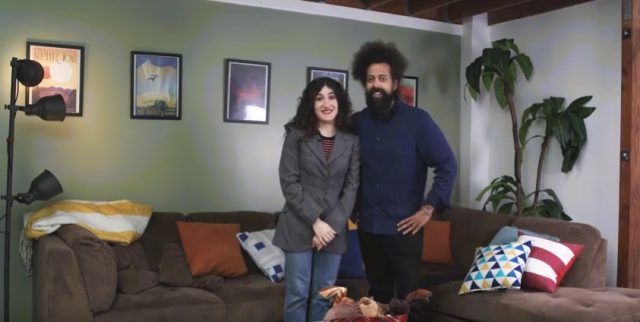 Comedian Reggie Watts has made appearances on late night programs such as “The Late Late Show With James Corden” and recently debuted a new Netflix comedy special last summer, “Spatial.” Watts has now teamed up with Butcher Bird Studios to create the first live-streamed and completely improvised sitcom episode online Thursday, May 24 at 11 p.m. (8 p.m. PST). The evening will start with a pre-show, then followed up with the improvised episode of “Crowe’s Nest” at 12:00 a.m. (9:00 p.m. PST).

Butcher Bird Studios is preparing for a 30-minute live broadcasted episode based on Watt’s comedy special titled “Crowe’s Nest.” There have been no plans for dialogue, or a pre-planned story. The episode will be entirely improvised. The Collegiate had a phone call with the episode’s director Steven Calcote and executive producer Luis Reyes on how they plan to tackle this unique style of television.

How did this idea come into fruition?

Luis: So what happened was he started liking the stage and started liking us. And he would stop by every couple months and just kind of improv for about three hours. We’d kind of shoot him. No money exchange here.

We’re not a huge name, so we wanted to hang out with Reggie – and of course, our exposure quintupled when we worked together.

Steve: Then we realized this process of working with Reggie – without our knowing – we were actually auditioning for him.

Luis: And then he (Reggie Watts) said ‘Hey I want to do a whole half hour episode of “Crowe’s Nest.” And of course at that moment I was like “Crowe’s Nest”? You mean from your Netflix special that little thing you did?’ and then he goes, ‘Yeah but I want to go all out.’ At that point me and Steve put together teams, started putting together plans – started to understand the rules of sitcoms.

Steve: The goal was to create a completely improvised live sitcom. Which is the creative equivalent of showing up to the New World and burning your ship in the harbor while you’re still in it.

Luis: Basically the whole idea is – we soon discovered was we actually done a few promos with Reggie and what we found was…creating typical improv boxes for them to follow like – creating a general storyline, a general relationship. That is not gonna happen it will go off the reservation. In fact, they respond best creatively to pushing back – ignoring the rules. Setting the rules in the middle of the table and gauging them.

Basically, what ended up happening – what our role became. We are gonna so rigidly gear for sitcom structure that they are gonna have to work to break it.

How do you prepare for directing a sitcom that’s fully improvised?

Steve: There is a beauty to doing live in general. It’s a great pleasure that the Facebook live platform has launched in the last two to three years and matured. I had through luck or happenstance and all the crazy relationships I’ve had. I’ve done some really cool projects. So we were on the giant Airbnb coast to coast live 100th anniversary of national parks where we did a four-hour-live broadcast.

We just get involved in making and breaking technology as it’s available in the modern live era.  And last summer I got pulled into as the director of a National Geographic Live pilot. That was sponsored by Airbnb to create this new on the ground – exhilarating – live exploration experience. That started of all things at the Roswell International UFO festival last summer. And other crazy live experiences along the way. Like in February we did a concert sponsored by Quickbooks live online – a million views – with artist Guerilla. So the part one answer is technologically we’ve been rehearsing this for three years.

We are rehearsing by trying to break the rules we set up for the tech people. So tomorrow is our first full tech rehearsal. And we are actually bringing in an improv group.

Here’s all that we are allowed to do. As a director, I am allowed to give them their starting set which is the living room. Unless Reggie insists it’s gonna be the cafe – then it’s the cafe. Unless it must start in the bedroom. We know it will start somewhere.

We only gonna know it’s gonna start. That’s all we know.

Do you two hope to see more improv incorporated in modern television?

Luis: I think personally I would like to see that. I mean, I love scripted television. I love writing scripted stuff myself. Especially having worked with Reggie the excitement of improv and what we are now able to do because the means of the productions of doing a live show have gone down. I mean 10years ago no – we could not have done a live broadcast of anything for less than a million dollars. Now you can – you can do it for less than $10,000. Which means we kind of opened a floodgate on how you can approach improv.

Again, there is gonna be a lot of ways not to do improv. A lot of things in television can be like that. I think people are gonna start developing a different language. A different understanding of that language a little bit more.

Steve: As much as it is – this is not a new form of art. Because in the 1950s television was just live for the most part. And you got a lot of great live coverage. But there were three networks with the money to do it.

And I think for the first time, because there is so much creative freedom. We are gonna be able to push the boundaries – the language that is live. Of course a play is live. You don’t cover a play – you don’t direct the viewer’s attention in a play.

We are excited ‘cause there is untapped language being established. There is something about being in that high wire act. As an actor – as a director – as a camera operator. There is something in there that allows you to create a brand new art form. Which can evolve and tell us new things along the way.
The live episode of “Crowe’s Nest” can be watched live May 24 on Reggie Watt’s YouTube channel along with other streaming platforms such as Super Deluxe and Digital Domain. The episode will start at 12 a.m. (9 p.m. PST) but the live stream will begin at 11 p.m. (8 p.m. PST) with a pre-show prepping the audience for the event to come.