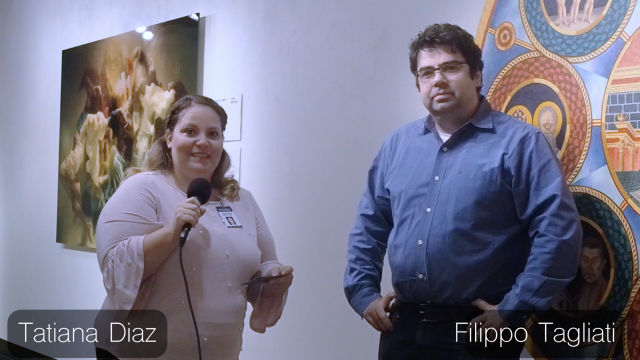 “Belt” is an architectural intervention made of a variety of materials including silk, wood and paper printed photographs.The piece, which is on display at “SiTE:LAB” 415 Franklin St SE Grand Rapids, was inspired from the space that it was placed in, therefore it blended with its environment very well.

“It’s an installation…An installation is something that in dialogue with the space where it’s been established,” Tagliati said. And when he was asked about people’s reactions to the piece he added, “It’s interesting, because people, they walk in the space and at first they don’t realize what it is. There is this sense of discovery about what this wall is.”

Tagliati, originally from Italy, is a photographer videomaker. “Belt” wasn’t his first entry at ArtPrize. His first participation was in 2011 with a two-dimensional piece called “The River Project,” his second one was in 2012, another two-dimensional piece called “Viaggio a Roma.” In 2015, he presented an installation called “Relocations” and last year he entered with a time-based piece, which was a 13-minute short movie about the French sculptor Auguste Rodin. The piece was called “Eve – infini des formes.”

University of Michigan transfer representatives will be at GRCC Jan. 26 to guide application candidates