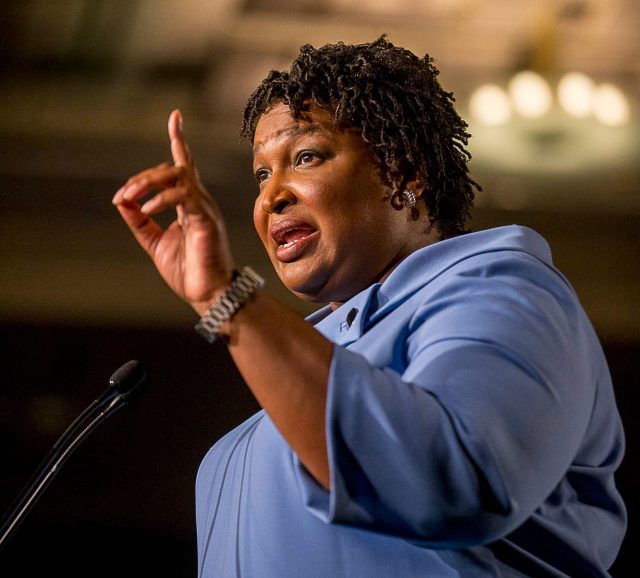 Speaking from Atlanta, Abrams began with anecdotes from growing up in a “middle to working class home,” with, “our family values: faith, service, education and responsibility.”

These anecdotes quickly turned into lessons about the mantra, “In these United States, when times are tough, we can preserve because our friends and neighbors will come for us.”

Abrams spoke on feeding furloughed government workers over the shutdown, passionately reminding the Trump administration that, “making livelihoods of our federal workers a pawn for political games is a disgrace.”

“The shutdown was a stunt, engineered by the president of the United States, one that defied every tenant of fairness, and abandoned not just our people, but our values,” said Abrams.

Abrams spoke on leading the Democratic party in Georgia for seven years and how when negotiations across the aisle arose, “we didn’t shutdown, we came together, and we kept our word.”

“It should be no different in our nation’s capital,” said Abrams, speaking on how finding a path to independence is not always negotiation but understanding.

While the sentiment is promising and encouraging, Abrams notices an obstructive force to this path.

“Hopes are being crushed by republican leadership that ignores real life, or, doesn’t understand it at all.”

Abrams agreed with Trump that bipartisan immigration reform is possible, while choosing to stray from going deep into talk of investigations.

Regardless of differences, Abrams did say about Trump, “I still don’t want him to fail. But we need him to tell the truth, and to respect his duties and the extraordinary diversity that defines America,” echoing the message of bipartisanship further.

Touching on gun safety, Abrams noted the band-aid approach Trump is still taking in terms of offering kickbacks to teachers who complete active shooter defense training and schools who hire armed guards while not addressing the real problem, guns.

Along with school, Abrams spoke on the “1.5 trillion” in student debt, something Trump did not, yet did not offer any policy measures.

“Our leaders must be willing to tackle gun safety measures and face the crippling effect of educational loans, to support educators and invest what is necessary to unleash the power of America’s greatest minds,” Abrams said.

Speaking for middle America, Abrams noted that, “In 14 states, including my home state, where a majority want it, our leaders refuse to expand Medicaid which could save rural hospitals, save economies and save lives.”

Following a somewhat controversial midterms for certain suppressed voting groups, Abrams stated, “The foundation of our moral leadership around the globe is free and fair elections, where voters pick their leaders, not where politicians pick their voters.”

Wrapping up her speech, Abrams noted disagreement with the president, yet a need to still respect and work together.

“Because America wins by fighting for our shared values against all enemies, foreign and domestic. That is who we are, and when we do so, never wavering, the state of our union will always be strong.”