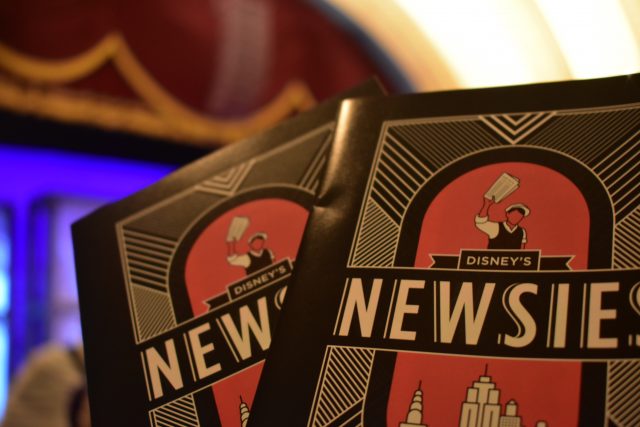 The musical, playing through June 23 at Civic Theatre  is set in the summer of 1899 in New York and follows the story of a group of boys who are outraged at how their generation is treated by the powerful men running the city and decide to go on strike.

GRCC student, Liam Bulkowski, 19, of Grand Rapids, has been involved in  theater since 10th grade and is back for his third performance at Civic Theatre. He plays Crutchie, a newsie with a “bum leg” and a heart of gold.

“The way I see Crutchie is as the shining hope through a dark life,” Bulkowski said. “He is the only one with a physical disability, but he remains optimistic. I relate to him because I see power in maintaining a positive attitude.”

Not only does Bulkowski feel a connection with Crutchie, but with the overall message of the show as well.

“This show is important because it shows that we can rise above the oppressors and those who seek to damage our future,” Bulkowski said. “If we ban together we can make a change. We tend to forget the power we have and the change we can create.”

And Bulkowski isn’t the one enjoying the “Newsie” experience. Maureen Mondry, 66, of Rockford, is a volunteer at Civic  who said she enjoyed the performance. The message also struck a chord with her.

“I think it’s important to take care of humanity,” Mondry said. “The rich just can’t make decisions for everyone else, they need to treat people fairly.”

Isabella Abuan, 17, of Okemos, Michigan, portrays Katherine Plumber, a young, ambitious journalist searching for the next big story. Abuan has loved music and theater since she was little and her dream is to perform on Broadway. Her favorite part of playing the character is being a strong, powerful woman on stage and showing that to audiences.

“It’s such a powerful story,” Abuan said. “It’s important to know that the youth have a voice. We can’t be ashamed.”

And the productions seems to be resonating well with audience.

Sheila Nyeholt, 56, of Grand Rapids, was wowed by the June 13 performance and the message. She brought her grandsons with her so they would learn to appreciate not only the art of theater and music, but the message conveyed, as well.

“They need to know the struggles children went through,” Nyeholt said. “It wasn’t as easy as they have it now.”

The music in this production helped convey the message, through the powerful words, dance sequences and instrumentals. Under the stage sits the orchestra, for this particular production there were only eleven in the orchestra. Amazingly, it sounded like a whole symphony due to how they played and the work of the sound director, Samuel Johnson.

Sue Stuit, 50, of Grand Rapids, is a GRCC  alumna who has played the bass guitar since the age of 6 and has been with The Civic since the 80s. She said music is an important aspect of her life.

“I have an autistic son who would only fall asleep to classical music.” Stuit said. “I found that while playing with musicians from around the world, places like Sweden and Germany, that music brings them together as a universal language. I wouldn’t be able to stand-up most days without music.”

Lisa Shatney, 52, of Grand Rapids, plays five different reed instruments for this production. She began her career in music when a bad director called her in to play the clarinet and from then on she was hooked.

“The art of music is such an amazing way to express your emotions,” Shatney said. “And the way we use to support them (the stage performers) bring their message.”

Sitting under the stage, the orchestra is unable to see the play, but they are still able to appreciate the story. Aaron Hettinga, 41, of Grand Rapids, plays the trombone and was emotionally connected to the story and characters.

“What strikes me the most is the brotherhood aspect,” Hettinga said. “It hits an emotional chord when Crutchie isn’t sure how to sign the letter, as a friend or even brother.”

“Newsies” is set to play at GRCT through June 23, tickets are available here. For a complete list of plays at Civic Theatre  follow this link.