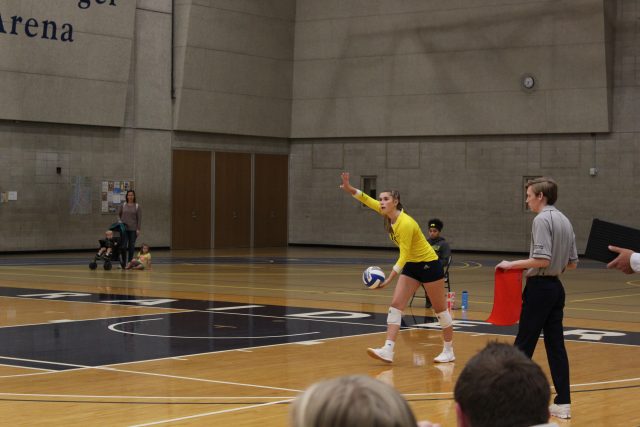 Danielle Johnston, 19, is a volleyball player from Comstock Park. She is an outside hitter, standing at 6’0”, for the Grand Rapids Community College volleyball team. Johnston has been around the game growing up with a family involved in the sport, which has shown throughout her college career now leading the GRCC Raiders to a hopeful 2019 season.

“I started playing as soon as I could, so around 3 years old,” she said. She continued by emphasizing that volleyball is apart of the family, “My mom coached at the high school and club level, so I’ve always been around volleyball.”

Johnston’s sister was also involved with playing volleyball. “I always enjoyed going to the gym when my sister practiced and played,” she said, “My sister always played pepper with me at home and I looked up to her.”

While at Comstock Park High School, Johnston made all-conference all four years. She also played softball in high school, making all-conference and winning a district title with her team. In 2017, Johnston achieved a Michigan Interscholastic Volleyball Association All-State Honorable Mention and Class B All-Region. Also, during her high school years, she played for the Far Out club team, which helped her become the dominant player she is.

Finishing last year with a 31-8 overall record, Johnston and the Raiders have high hopes for the rest of the season, but she also said “I’m looking forward to becoming closer with all the girls and growing our relationships on and off the court.”

Now in her sophomore season, Johnston has already recorded some career highs. Last season she recorded 16 kills on Sept. 27 2018 against Glen Oaks, 19 digs against Lakeland on Sept. 29 2018, four blocks when playing Lansing in the regionals on Nov. 1 2018, and also recorded three aces in two different games in her freshman season.

College volleyball players do not have much free time, but when asked what she likes to do outside of volleyball she said, “I enjoy spending time with my friends and family.” Although volleyball takes up the majority of her time, Johnston made it clear as to what her priorities are during the season, “Right now I am focused on Raider volleyball.”