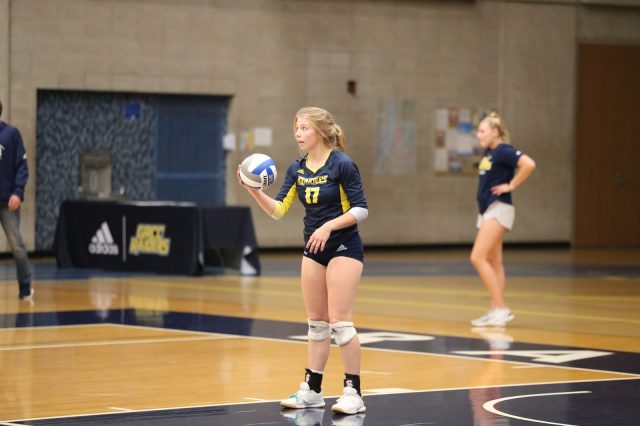 Originally from Saranac, Emma Pachulski developed a passion for the game of volleyball thanks in part to her uncle and current coach, Chip Will. Volleyball has been a tradition for the Pachulski’s for quite some time, with her two younger sisters Ellary and Irelyen playing for multiple years themselves. “It [volleyball] all derived from my uncle..when I was like two or three he started giving me lessons, it’s like a family sport,” explained Pachulski. While not only succeeding in volleyball and track and field (receiving all-conference, 4x in volleyball and 3x for T&F), Pachulski managed to receive Summa Cum Laude at Saranac.

“I’m a perfectionist, so it was pretty easy keeping up on grades. I did have to work hard to be top ten..I could’ve easily been top 5 if I hadn’t gotten a C my freshman year,” Pachulski said.

The 5-foot-10 outside hitter for Grand Rapids Community College women’s volleyball kept her goals short and concise for her final season of play. “My goals are to try my hardest to impress my coaches to see the court, and be the best hype man I can be,” explained Pachulski. With 40 sets (22 games total) played this season, she is averaging 1.83 points, 1.73 kills and .63 digs each set. When asked what it’s like to continuously play under her uncle for well over a decade now, Pachulski explained she receives no special treatment.

“Playing for (Will), it’s not like he gives any special attention. It’s almost the opposite,” Pachulski.

Currently majoring in cinematography, Pachulski plans on transferring to Spring Arbor or Western Michigan University to continue her volleyball career and pursue her major. She longs to fulfill a childhood dream of becoming a movie director. “Ever since I was little, I would get up early and go to my mom’s PC and start writing stories and scripts,” Pachulski said. “I’ve always had a passion for it. I like making people cry, so I like making videos that hit close to home.”

Outside of her extensive time on the court, Pachulski strives to spread her theatrical personality, add to her Converse collection and maintain high hopes of bringing back the culture and spirit of the ’80s.

“I love everything about the ‘80s; the music, the clothing style, I wish I had grown up in the ‘80s,” Pachulski.