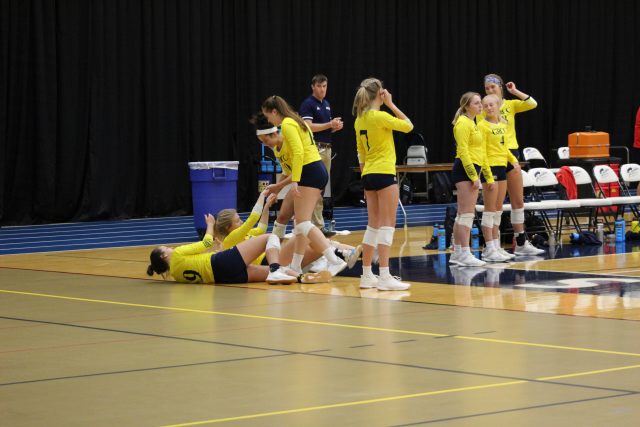 Ever since she was little, Heather Coffman has been playing volleyball. At first, it was with her older sister in her backyard. Now, with the help of her teammates at Grand Rapids Community College, she hopes to play for a national championship.

Coffman, an 18-year-old defensive specialist from Hudsonville, is doing all she can to help push her team to the next level this year.

When asked how she is preparing to help her team go to nationals, Coffman touched on the importance of working your hardest in practice.

“Everyday, going in to practice, you have to work your butt off and expect to be exhausted by the end,” she said.

“My coaches push me to succeed, and to be the best player that I can be,” she said.

Chemistry is an issue for any team that adds new players, but Coffman said she isn’t as worried about chemistry at this point in the season. Although she admits that it was a bit “scary and intimidating” for a freshman coming to play for a back row of players that consists of entirely sophomores.

According to Coffman, the team’s chemistry has improved drastically since the beginning of the season with the players making an effort to bond through activities such as studying together, talking with each other, and having spaghetti nights with each other in their shared apartments.

Coffman has been playing volleyball for as long as she can remember.

When asked about who got her into it, she spoke about her older sister, who taught her how to play when she was young.

“I was always playing in the backyard with her,” she said. “Ever since then, I knew that I wanted to play”.