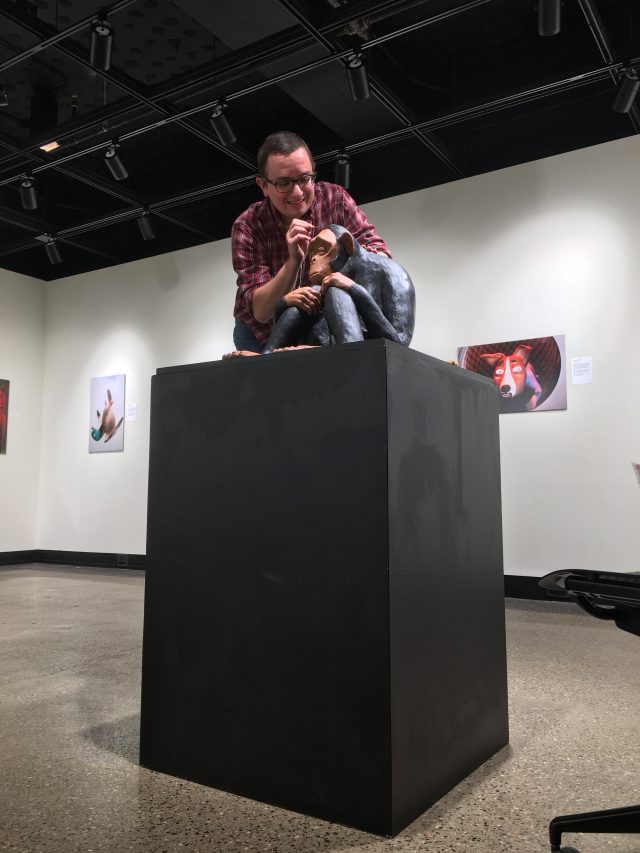 On the fourth floor of Raleigh J. Finkelstein Hall there are some funny little creatures trying to lure any passersby into serious dialogues.

An exhibit using photos of sculptures put together by former Grand Rapids Community College student Jonathan Lopez is in the Collins art gallery until Oct 25.

“I like to use plasticine, because it disarms the subject,” Lopez said. “You look at it and you automatically think ‘this is for children.’But when you get down to the crux of the matter, a lot of times it attacks things people don’t want to talk about.”

In a world where a lot of people don’t even want to talk about political affiliation, getting them to think or talk about things like our part in the opioid crisis is a feat. Using characters like Charlie the Octopus, Lopez opens up those rusty gates of conversation.

“When you’re dealing with cartoon like animals in plasticine (clay), you can get away with pretty much anything and approach any topic and ask questions you couldn’t ask otherwise,” Lopez said. “I want you to stop, tear down (those) barriers, and to really think about what’s being discussed.”

Over the next 10 years, Lopez developed an already natural talent he displays across five  “projects” in the exhibit including: Bright Eyes, On the Shoulders of Animals, No dignity, Claylist, and Curious Cuisine.

In the corner of the gallery, right on the way out, there is a piece of paper that sums the exhibit up in the artist’s own words.

“The goal of this exhibition is to make people laugh, gleefully expose the absurdity of modern online dating, honor the lives of animals lost in the aggressive race to space and reveal that we are but one step away from falling prey to the sins of those who came before us.” Lopez wrote in his artist statement. He added in person, “There’s that saying ‘History stands on the shoulders of giants.’ Well, in the case of the Space Race, they were animals.”

While most of the exhibit consists of sculptures that Lopez has photographed in various scenes, there are a few sculptures on display, including a deeply troubled monkey that was created on site for the gallery.

All the sculptures are temporary as Lopez continues to melt down and reuse the plasticine clay he sculpts with.

“When you have just a plain old sculpture by itself, it’s lifeless,” Lopez said. “It has to be in its environment.”

All of the photos Lopez took of his sculptures are immersive and seem to be mid-action.

“It’s like a still from a movie —a moment of the character’s life captured,” Lopez said.

Lopez knew he wanted to do something like stop motion at a young age.

“‘Wallace and Gromit’ was pretty big in my life growing up,” he said. “‘Gumby,’ too, but if you get done watching ‘Wallace and Gromit,’ ‘Gumby’ looks like child’s play… It’s just amazing what happened when digital technology came out and really became the forefront, stop motion became far more impressive.”

Lopez learned how to do basic animation by tinkering around with it when he was young and has been at it ever since.

Lopez is not a “full-time” artist. He has a day job just like Clark Kent.

“I’m baking at my daytime job at the Bagel Beanery (on) Clyde Park” Lopez said. “It keeps me in good shape. I’m walking all day. I usually get about five or six miles a day. Sometimes though, my hands are fatigued. I would love to spend more time illustrating. I feel like I’m getting too old to be baking. But I know how to pace myself.”

Lopez, 29, made sure to acknowledge he doesn’t regret working as a baker for as long as he has.

“I was such an introvert but when you’re in a coffee shop, you have to be interested in people and you can’t just be reserved,” he said. “It pays the bills, it keeps me in shape, and people come in everyday and ask me about what I’m up to so it keeps me accountable. There’s nothing wrong with being a baker, but everyone I know knows I have a knack for illustrating and they want to see me pursue it.”

Scott Garrard is one of those people. He is a GRCC pottery professor and was acquainted with Lopez when he went to school here.

“Jon was here several years ago and he just came down to ask about plasticine and ceramics,” he said. “He was always interested in molding, and different opportunities for exploring different materials and that’s how we got to know each other.”

Garrard has followed Jon’s career and said, “Well, I tell ya, Jon’s come a long way from the first… work he’s done. One of his greatest strengths is he’s really embraced the opportunity to come to GRCC and engage with the professors that were here when he was here. He respects that and he absorbs the critiques and constructive criticism in a healthy manner to grow. He had raw talent and determination. Combine that with the ability to listen to other people, but keep his identity. That’s a great strength.”

Garrard mentioned to keep an eye out for other students from GRCC with talent because, “We always have talented students. They’re shaping our programs while we are shaping them.”