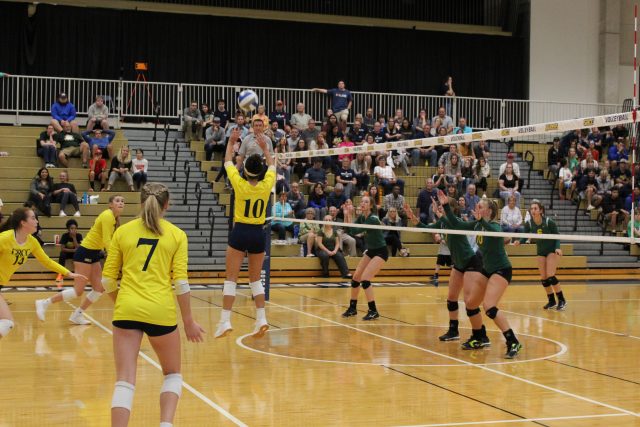 GRCC Women’s Volleyball team is headed to the NJCAA Division II National Tournament this weekend. They are headed into the tournament hot with an 11-game win streak. They are 15-1 in conference, 30-6 overall, and are ranked 10th in the nation.

Before the team left campus Tuesday, sophomore Emma Pachulski summed up  how she and her teammates feel going into the tournament.

GRCC Athletic Director Bill Firn spoke on what it means for the college to have a team going to the national tournament.

“It really puts GRCC athletics and GRCC in general on the map,” Firn said. “…We have a great chance to go pretty far here in volleyball and it gives good recognition and shows all the hard work that our student athletes put in and gives credence to that work. So I think it’s kind of a culmination of the whole season, everything that everyone has put into the work from the administration to the coaching to the student athletes. It recognizes their hard work and were also representing GRCC and the students who go here. We’re representing the Grand Rapids community and the area.”

Firn also explained how Raiders fans  can watch the tournament.

“The NJCAA has a really good livestream,” Firn said.

To watch you go to njcaatv.com and select each GRCC match for the nationals. There is a fee for on demand watching. It is $4.99 for a single broadcast pass and $14.99 for a championship season pass. You can go to the website and watch with this link here.

GRCC will face off against the no. 7 ranked team in the nation Northeast at 11:15 a.m. on Nov.21 in Charleston, West Virginia.