The South Kent County Landfill located at 10300 S Kent Dr SW in Byron Center, receives roughly 600,000 tons of trash per year. The Kent County Waste-to-Energy Plant burns around 550 tons per day instead of sending it all to the landfill. This waste comes from the six cities below. 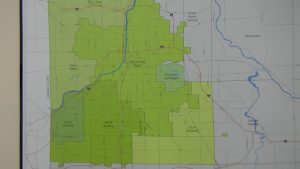 The WTE plant at  977 Wealthy St. SW in Grand Rapids, has been operating since 1989. In that time, they have burned roughly 5,300,000 tons of waste and pulled enough ferrous metal (130,000 tons) out of the waste to make two aircraft carriers or two Mackinac bridges.

The facility is owned by Kent County but operated by a company called Covanta. The operation is funded by energy sales and dumping/tipping fees. The dumping fee for the landfill is around $35 a ton, whereas the WTE charges around $55 a ton for what they call a tipping fee. These are the rates that trash haulers pay to dispose of waste for each of the options.

The fire is mostly self-sustaining throughout the day. There is some gas used to ignite it during the first six hours of burning, but over half the day’s burning is done with just fans and grates.

The fire is used to create steam and air pressure that turns turbines, creating energy for the county. The trash burning creates between 550 kwh – 700 kwh on average. The fire and more can be seen in this video.

“That is about enough to power 1,100 homes,” said Paul Smith, operations manager at the Kent County Waste-to-Energy. “Since we do things the right way here, it’s not too smelly either.”

The facility pulls air from outside and blows it up through and across the trash fire into the boiler using a series of fans. It doesn’t escape in levels not approved by the EPA. Carbon Monoxide, Nitrous Oxide, and Sulfur Dioxide are monitored to name a few. Eagle also monitors emissions on a quarterly basis. “There’s nothing I wouldn’t want to show a (regulatory) official here,” said Smith.

Trucks are weighed before they dump onto the ‘tipping floor’. In the pit, on the side of the tipping floor, there is, on average, 3,000 tons of waste.

Multiple front end loaders push the trash into a manageable pile while a crane operator pulls huge mechanical handfuls of the waste into one of two hoppers. The two hoppers are on opposite sides of the crane while the trash is all in front of it. It mixes the pile by pulling from one side and letting some go on the way to the chute that leads to the fire. Then the operator pulls from the opposite side and lets some go on the way to the other chute forming a sort of figure eight pattern.

“Mixing is one of the most important jobs the crane operator has,” said Smith. Since there is cardboard and plastic that burns at a rate “two to four times as hot as the intended waste,” the operator needs to mix the loads so no one load will burn excessively hot compared to other loads.

In the control room, there are two monitors on levels of emissions of CO, NOx, SO2, and more. Each one has all the information, but if one fails for some reason, they can continue to monitor on the other screen. The EPA monitors emissions however the “emissions at this facility generally stay 90% under the required levels.”

Burning reduces the volume of waste by about 90%. The whole facility is designed to reduce the volume and harmfulness of waste. 6,500,000 tons of waste covers 130 acres at South Kent County Landfill. 5,300,000 tons of burned waste makes ash that covers 18 acres. Burning the trash has a higher short term cost but it could save money in the long run.

The landfill is more or less final. They could dig up the trash and burn it, but it would be far more difficult than burning it before it’s buried. Also, there is far more upkeep on landfill waste than the ash residue from burning. For landfills, even after we are done adding to it, there are still the large tasks of containing methane emissions (26-80 times worse than CO2 for atmosphere’s health) and leachate removal, not to mention loss of businesses and homes.

The WTE is aiming for zero budget but has fallen short recently so it had to dip into savings and eventually increase prices.

The Department of Public works’ goal is to turn a 250 acre piece of land near the SKCL into a renewable business park including a compost center and a commercial construction resource recovery center. The alternative is adding 250 acres to the landfill that already spans 130. Smith estimates whichever plan is decided upon will be complete by 2030.

Editor’s Note: This story has been updated on Feb. 20 to clarify details of the Department of Public Works future plans and to correct some inaccuracies in the process. The plant burns around 550 tons per day. A previous version of this story stated the number to be 500-1,000 tons per day. Information regarding the time that the plant fire starts was also removed from this story. Trash is moved via front end loaders rather than forklifts and the control room does not monitor levels of CO2 as previously stated.