Apparently both toilet paper and cake mixes are critical supplies for survival of a societal shutdown.

The transition to distance learning was different for each of my classes, and each one had its own hiccups. It’s going pretty smoothly now, but one of my professors has added multiple weekly assignments and learning materials that actually make it difficult to get everything done on time. I appreciate the support and information, but having so much to do means that I’m rushing through things more than before. In-class learning provided me with the same experiences with a smaller time commitment.

Ten hours after the stay-at-home order that was issued by Gov. Whitmer went into effect, it seemed individuals began to take the pandemic more seriously. What is typically a frequently used intersection was completely desolate Tuesday morning, thankfully. Hopefully, individuals will continue to follow the order and stay home in order to suppress the spread of the coronavirus.

While in the parking lot of Meijer on 28th St. in Cascade, I got a Public Safety Alert on my phone with information on Gov. Gretchen stay-at-home order. Messages like this, though few and far between, are often Amber Alerts warning residents to be on the lookout for a kidnapped child in their area. The one I received Monday evening had a different kind of ominous feeling to it. It was dusk as I entered the store. There was a particular frenzy of sorts. Patrons didn’t converse with one another. Several people wore masks and/or gloves. Knowing that the order requiring Michiganders to stay home was merely a few hours away, the tense air inside Meijer was tangible. As an employee walked up to the service counter, I overheard them ask their manager for a sign. Apparently they were going to display some sort of “Essential Worker on way to work” sign in their window for fear of being pulled over by a law enforcement officer for violating the governor’s order. I received another message on my phone, this one from a professor via Blackboard. “Tonight at midnight our lives change yet again…” read the introduction of their homework assignment. It was dark as I left the store, which only seemed fitting considering it matched my mood.

Despite the fact that many businesses have either been forced to close or have decided to close because of the stay at home order that Gov. Whitmer issued, it seems that Tropical Smoothie Cafe thought it the appropriate time to release their new “Immune Blast Smoothie” for only $2.99.

Although this is is rather well-timed given that the coronavirus is most dangerous to people who have weakened immune systems, is it really appropriate to encourage people to stop by their local smoothie cafe and grab a drink that boosts their immune system when the best way to protect yourself and your immune system at a time like this is simply to stay home?

Even if you order it takeout-style, wouldn’t it still be safer to not expose immuno-compromised people to the germs of the employees?

More and more supermarkets and stores are adding marks on the floor, at six feet apart in the check-out line, to encourage social distancing. This isn’t the only thing off when it comes to taking a trip to get groceries, though. Many aisles that include popular products at the moment will also have a sign which states a limit of the quantity you can buy of that product.

Speedway in Grandville
2:30 p.m. on March 26
Reported by Kory Goldsmith

I went to the Speedway on Chicago Drive in Grandville to get a Mountain Dew and a snack as a way to get out of my family’s house and enjoy the fresh air. On the door before you enter the Speedway, was a sign stating fountain drinks and coffees were no longer available. Also, they place a sign telling you bottle returns are closed. Observing the racks, I didn’t see much bare or only a few left. One thing that didn’t make me conformable was there wasn’t any reminder about staying 6 feet apart or designated places to stand while waiting to buy your gas, drinks, or snacks. When looking at the low gases prices, I was in disbelief like every time I see gas prices under $2 a gallon. On one hand, you’re thrilled the gas prices are low, but on the other hand it’s a reminder where we are as a country right now. 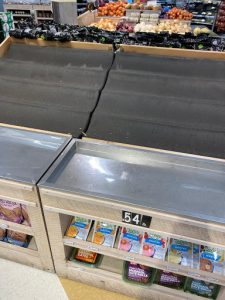 The Numbers Are Rising.
This week, things have changed and confirmed diagnoses have increased. The silence has arrived within the chaos. People are worrying from home, stores are no longer as busy. The items that have cleared out shock me every time. I was sent to the store to gather Honey Nut Cheerios, skim milk, and bananas. I came home with Maple flavored Cheerios and 2 percent milk. Not the same. Nothing is the same. My mom can’t have her strawberry banana smoothies, my sister can’t go back to school in Indiana, I can’t sneak chips at work. So we are living in this quiet chaos hoping everything will return to normal, hoping soon that we can find peace scrolling through social media and hoping that the noises we hear and videos we watch are speaking of healing rather than daunting numbers climbing. I’ve lived in this town my whole life, now it’s like a ghost town with police patrolling the streets scaring civilians back into their houses. I hope the calendar on my wall no longer symbolizes deadlines and an unknown cure, but it will soon symbolize normal days which I will no longer dread. Days where I can go on cruises in my car, days where I can shake a stranger’s hand, days that are not a part of a sad statistic.

Mind numb : a uneventful day in a eventful time
Online Streaming Binge
Well, as you hopefully know by now, the quarantine is in full effect. To some this is highly troubling it is literally driving them to “madness.” To others this is awesome. They finally have a break from school and work and can just sit in their comfy pants all day watching TV and playing video games. However, to me it’s well… meh. Let’s get one thing straight. I’m not complaining, being stuck at home has its advantages. I can sleep as long as I want. I don’t have to shave or worry about going to bed at a reasonable time. But here lies the problem. I literally stayed in bed from 7:30 a.m. until 8 p.m. on March 26. And the night before on March 27 I was up all night doing nothing but sitting on my couch streaming shows until I finally went to sleep at 9 a.m. . And while this is somewhat nice, it is incredibly mind numbing. And somewhat ironic. As the coronavirus cuts a swath through countries and cities, I’m just sitting on my couch with a cup of hot cocoa in my hand, a bathrobe over my clothes, watching “Buffy The Vampire Slayer” on the TV.

The Crockery Creek is a quite small, slow river that runs through, you guessed it, Crockery Township, and feeds into the Grand River. Crockery Township is, for the most part, a decade or two behind the majority of American life. Most of the township didn’t have internet until about three to four years ago, when HughesNet finally started setting up dishes in the area. Even now, a stormy day pretty much eliminates streaming capabilities with satellite internet, even at low resolutions.

The people who live along the Crockery Creek are slowly becoming less physical in their labor and less active in their free time. That being said, they are still far more hard working and active than your average “city slickers.” I give all this background because my dad still likes to do things the old way oftentimes. He relishes the opportunity to help my grandparents with their farming endeavors, go camping, and dangle some nightcrawlers in the creek.

I can’t help but be saddened that in my 24 years living in Crockery township and dangling nightcrawlers at different spots along the creek, there has been a steady decline of families who go fishing.

On March 25, 2020, however… there were so many fishers at the first spot we went to, there wasn’t even enough room to set up a couple poles and maintain social distancing protocols. So my dad, my wife, and I drove to another spot where there were three families fishing along the creek. There might have been room for another family, but there were dogs and kids playing around, so we went to a third spot that is actually on the private property of one of my dad’s friends.

It was nice to see the families happy together, enjoying the outdoors, instead of spread out in the living room each looking at a different screen. There were fires and s’mores and hot dogs. And we caught a catfish that my grandpa wanted to use as coyote bait. I can only hope for this anomaly to last a little longer.

Editor’s Note: This story was updated at 1:16 p.m. on March 30 to correct the location of one of the stores listed.