Absent Audience Athletics: the effects of Corona on Pro wrestling

Well lads and lasses the lockdown is still in effect as April has arrived. Many Businesses have shut down. Movies are coming to streaming services early as a result. Restaurants are doing takeout only. The filming of movies and television shows have been put on hiatus, but “what about Pro Wrestling?” you may ask. Well that’s actually a funny story.

WWE is still running events just in their training center also known as The Performance Center. So events like “Monday Night Raw” and “Friday Night Smackdown” which are usually full of fans and homemade signs are now empty although humorously enough they still have the barricades set up. The shows have a skeleton crew, take “Friday Night Smackdown” for instance. Usually they have two to three commentators, one who speaks for the faces or good guys and one who speaks for the heels or bad guys, the third often being neutral. However, on the last Friday Night Smackdown there was only one commentator, – Michael Cole. “Monday Night Raw” was even more of a skeleton crew as much of the show was reshowings of previous Pay Per View matches.

But WWE was still broadcasting, which I suppose shouldn’t be that surprising as shortly after the Sept. 11 terrorist attacks  WWE Smackdown broadcast live to a huge audience. That being one of the first mass gatherings after the attacks. So we should not be surprised that WWE refuses to shut down willingly.

So there you have it folks, even if all other sports and reality shows are on hiatus you can still look to Vinny Macs House of Smacks to keep you entertained. 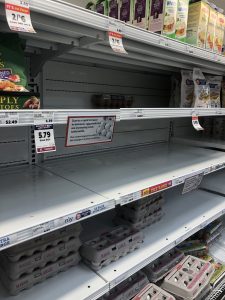 They say it takes two weeks to create a habit. My question is can something like this ever become normal? Empty aisles of toilet paper and cleaning supplies, quiet roads, social gatherings and even parties over zoom. I dont think its a form of acting rather than a way to cope. People are imprisoned in their fears, in their struggles, in their own heads, in their health, and in finances. I think people need to remember it is okay to be doing things for yourself, it is okay to be doing small things, it is okay to do nothing sometimes. What I have learned in all of this is sometimes it’s the simple pleasures that make everything better: movies with your family, hikes that get your shoes too dirty, car rides to the beach, taking your pets outside.

Yesterday was my dad’s birthday. With many restaurants closed and nowhere special to take him to celebrate, my family opted instead to order takeout and watch movies and TV together.

Although no one in my family is particularly keen on going out normally, we always make exceptions for birthdays. A nice dinner at a restaurant that would normally be considered too expensive for us outside of special occasions. A round of golf together. A movie. Nothing huge, just something to commemorate the passing of another healthy year for someone close.

This year, we were reduced to eating takeout together as a family, watching reruns of an old college basketball game from the 90s and discussing how crazy times have gotten recently.

Even though some of our normal traditions may have to be postponed or canceled until we’re free to stop practicing social distancing, spending time with the people we love is still important, even if being locked in our homes with them drives us crazy sometimes.

With the lockdown in effect there are only so many activities available outside, and when the weathers nice why not take your dog on a walk? Usually when it’s over 50 degrees and sunny, there’s a basketball game going on in the park, today there were none. While there were a handful of people also enjoying the weather, many chose their own section of the park and stayed near there, avoiding people who came closer. There wasn’t anyone playing on the playground  equipment, but there were two people playing tennis. The majority of people, if they weren’t sitting in one area, were riding bikes or walking their dogs, keeping a distance from others. 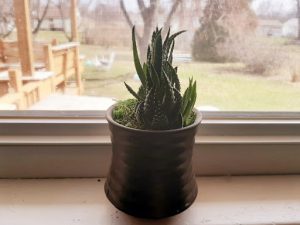 Spring is finally setting in. Trees are budding, perennial flowers are sprouting, and one of my succulents has grown three offshoots! Fun fact: the offshoots of a succulent are also called chicks. Little signs of growth and life like this have been major mood boosters for me in the last week.

My bedroom
1:12 a.m. on April 1
Reported by Co-Editor-in-Chief Brianna Wetherbee

I haven’t had time to watch TV shows in quite some time; even during Christmas and Spring break this year. However, I recently broke that stint and began watching the bizarre Netflix Original docuseries “Tiger King.” The humans in the show are just as exotic as the animals. Never would I have had time, nor desire, to devote to an idle activity such as binge watching. Considering the unusual circumstances we find ourselves in, I have become a little bit more lenient with my time. Sometimes I feel guilty for taking time to “relax” knowing the state of this country and world is anything but.

Largely, my family and I were unaffected by COVID-19 up until March 31. It had already been about two weeks since my wife and I had seen her side of the family. It was the day before my sister-in-law was to be admitted to the hospital for an induced birthing of her first child.

What an incredible moment. The miracle of childbirth. Police would tell us to stay home if we went to go see her and were stopped for some reason. Yet, how can one stay home while their sibling is having their first child? What kind of monster wouldn’t drive 15 minutes or face a small fine to be with a member of their family for probably the biggest moment of their entire life?

On the other hand, what kind of monster would get a baby sick just so they could be a part of her first moments? 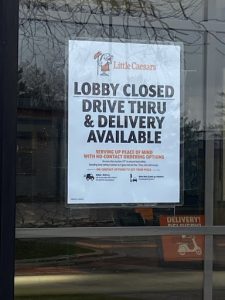 On Monday, I ordered a pizza and Mountain Dew as my soda of choice on the Little Caesars website for a 2:30 p.m. pick-up at the Chicago Drive location in Grandville. I ordered online so I wouldn’t pay with cash or have to touch the debit keypad. Unlike the last time I ordered, I wasn’t allowed to go in the lobby. It was weird walking up to the drive-thru window and picking up my food without being in a car. In the end, I got and enjoyed both my pizza and Mountain Dew at the nearby park where I wanted to eat.

Charlevoix, Michigan
Around 1:30 p.m. on March 27
Reported by Joshua Carlson

In my hometown we have an ice cream/food service called Dairy Grille. It’s a community favorite and it opens up around this time of year every year. Currently in Charlevoix all the restaurants are either delivery only or they are just shut down for business at the moment. To the community’s surprise, Dairy Grille is still open for business, but it definitely doesn’t have the same feel. All of the workers have gloves and they have marked out “X” spots resembling how far each person in line should be standing from each other. If you order food they put your bag on a back picnic table with your name, so it still limits the most human contact. It has an almost eerie feeling because usually everyone is socializing, but now -and rightly so- everyone is quiet, and it almost feels like they are on edge. I haven’t gone out much since the call for quarantine, but this is my experience with the food industry in my small town.

Officer involved in the death of Breonna Taylor indicted for wanton endangerment, grand jury decision met with protests across the country

GRCC’s Board of Trustees discuss budget and school updates during September...

The thin line between peace and protest: anger in the wake...

Officer involved in the death of Breonna Taylor indicted for wanton...