Since I’ve had more time on my hands, I find myself diving back into some of my old hobbies. My goal has been to keep my creativity up for my mental health, so cooking, coloring, and reading fiction have been my main pastimes when I’m not working on projects around the house. While reorganizing my storage, I came across my old keyboard, so I’ve been re-familiarizing myself with that too. All of that helps me avoid becoming a total screen zombie, although I have also been enjoying some good old fashioned binge watching of the Marvel Universe movies and various shows ranging from “The Last Kingdom” and “Sherlock” to a five-season long reboot of the old “She-Ra” series called “She-Ra and the Princesses of Power.” It sounds really dorky, I know, and it doesn’t gain any street cred by being an animated series, but that show has some serious gravity. In that sense it’s kind of like the old “Avatar: The Last Airbender” series. It’s endearing, theatrical, goofy, and generally cute, but on the flipside it’s about a war that’s waged against the citizens of a beautiful place by a power-hungry colonizing power, and the characters are all inherently unique and traumatized by what they’ve experienced.

Since I’ve been back in the full swing of work and summer classes, if hobbies like watching between one and three episodes of “Star Trek: The Next Generation” and “Star Trek: Deep Space Nine”, “Chuck,” “Covert Affairs,” or “Homeland” shortly before going to bed are not hobbies; then I haven’t picked up any hobbies. If I watch an episode of “Covert Affairs,” I choose an episode from season 3-5 and I do something similar with “Homeland” choosing episodes from only seasons 4-7 because I don’t enjoy the other seasons of either show. I feel like I had more free time during this prior fall and winter semester. I also will play a game of “Splendor” or “Catan” on my iPad so I’m ready and prepared when I play against family members when playing for pride.  Prior to feeling like I had little to no time for hobbies, I would write as a hobby. I’ve started writing three books which are fantasy, mystery, and fiction mythology genre books. 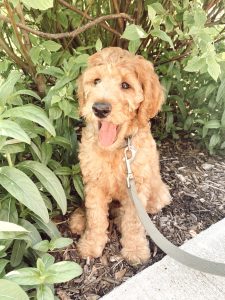 My brother, Jordan, got a golden doodle just a few weeks ago. Since then, I have spent a lot of time with his new puppy, Whittaker. Jordan is the first one in our family to have a dog and needless to say, I’m in love. I have been at his house a few times a week; playing with Whittaker, going on walks, grilling out, etc. It truly is a whole new experience being around a fluffy ball of energy. Even though my brother has only had Whittaker for a few weeks, they have already bonded so much. It is precious to see the relationship that develops between a dog and its owner. Jordan jokingly refers to me as “Aunt Brianna,” and while at first I thought that was a bit ridiculous, I have a picture of Whittaker as my screensaver and talk about him to anyone who will listen so I guess the title may be justified.

Hobbies ehh? We all have them. Some cook, some read, some collect insects. The only thing I can cook not involving a microwave is ramen noodles, I’ve had too much trouble sitting still lately to read, and while I have found quite a few bugs in the basement I find collecting their carcasses to be well… creepy. No, my hobby/obsession/purpose in life is writing. I’ve been doing it nearly as long as I’ve known how to speak, crafting together epic stories of heroes and villains, monsters and aliens, good and evil. Yes, even when I am angry, sad or inspired I just sit down at my computer with a Dr Pepper and start writing. I have also taken to creating characters based on people I know, people I like are benevolent, people I dislike are malevolent, and their role in my stories are based on how well I know them, close friends of mine have big parts and may even be main characters, and on the flip side people I despise are main villains.  This is my hobby. That which keeps me sane in these times of madness; what brings light to my darkest of hours.

Since being in quarantine I have had more time than ever. Most of the time I am working on my summer classes, but when I am not doing school work I find that I have so much free time that I would normally spend with friends. As a result I have had to get creative on how I use my time. I started watercolor painting a lot more, however I actually ran out of paper and apparently everyone else on Amazon did too because all of the watercolor paper was out for a couple of weeks online. I also started playing the ukulele more because I do not have big enough hands for a guitar. I personally really enjoy it, but my family absolutely does not. I have started walking more and really like finding new hiking trails around the beach to try out.

Since being in quarantine I’ve taken time to learn more forms of editing, whether that be photos or videos. I’ve had a lot of time on my hands to learn Photoshop again before having to go back to work. Now that I’m at work again I don’t have that much free time to work on these skills, but I’m still able to practice on some stuff outside of work. I’ve been watching a lot of videos on YouTube and following along with them to learn new tools in the different editing programs. There’s a lot of really good free resources online if you’re looking into learning any computer programs.

A different way to graduate