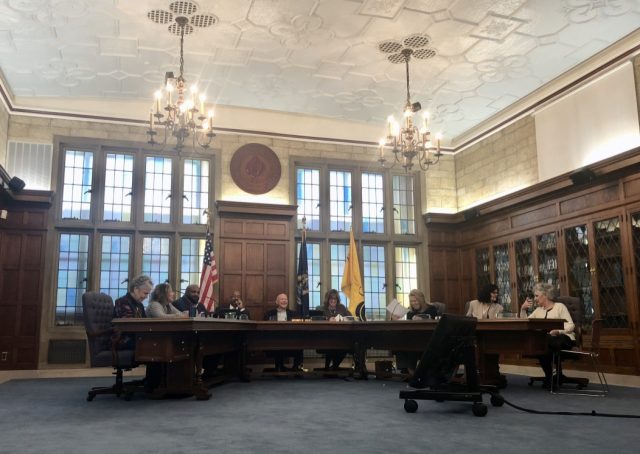 In an unusual procedural move, the Grand Rapids Community College Board of Trustees approved the refunding of facility bonds to save approximately $1.4 million worth in interest payments during Monday’s work session.

The bonds, which were issued in 2012, are set to mature between 2023 through 2032. The board made this decision to refinance in an effort to shore up the college’s savings due to the uncertainty of enrollment in the 2020-21 school year.

“The administration sought permission to issue refunding bonds and use the proceeds to call (or pay off) currently outstanding bonds that were issued back in 2012,” Dave Murray, Director of Communications for the college, stated in an email. “Current interest rates are significantly lower than they were back in 2012, thus there will be significant savings to the college. It’s a transaction similar to refinancing a mortgage to get a better rate. The college could potentially save $1.4 million in interest payments by obtaining a lower interest rate.”

Lisa Freiburger, Vice President for Finance and Administration, said during the meeting that GRCC could use the saving to “help with any operating cost issues that we might encounter as we’re looking at some potential fluctuations in our 20-21 financial picture.”

“We’re not issuing new debt to do anything new,” said Freiburger. “It’s more of a refinancing so that we can save on today’s interest rates.” 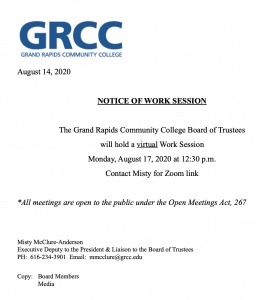 While this is a strategic refinancing move for the college, the unusual part is the vote took place during a work session over Zoom, not at an actual board meeting during which agenda items are traditionally voted on in public. By doing this, board members put themselves in a gray area concerning Michigan’s Open Meetings Act,  according to legal counsel for the Michigan Press Association.

“To conduct an open meeting, they have to advertise that a meeting is going to take place,” said Jennifer Dukarski, Deputy General Counsel for The Michigan Press Association. “And a meeting has a special meaning. It means that the body will get together to deliberate or make a decision about policy. Advertising this as a work session does not give the impression that they will be rendering a decision about policy.”

In order to join the Zoom chat, those interested in attending had to request the Zoom link via email. This was emailed out in advance, and not published on the GRCC website. During this work session, it was only board members present.

After being presented with the information about the bonds during the Zoom meeting, GRCC Board Chairperson David Koetje, asked if the board was able to vote on the resolution in a work session. Misty McClure-Anderson, Executive Deputy to the President and Board Liaison, first said the decision would be forthcoming, but later after receiving a message from GRCC’s legal counsel, texted Koetje that the board could move forward with a vote that day.

The board voted unanimously to pass the motion to refund the bonds. Trustee Sheryl Siegel made the motion to take the bonds to market. Other members didn’t verbally agree, instead signaling their approval.

“I see somebody nodding yes,” said Koetje when looking for a trustee to second the motion. “Let’s see how we do all in favor? Why don’t you touch your cheek.”

When asked if the matter will be discussed at a later board meeting, Koetje said, “No, it will not, the intention is that it will not. That matter is now behind us. We’ll move on.”

While Monday’s GRCC Board vote may not directly violate the Open Meetings Act, Dukarski said it violates the spirit of the act.

“It definitely doesn’t have the strength of transparency that one would expect under the Open Meetings Act,” said Dukarski. “We’re left in a little bit of a gray area.”

Editor’s Note: This story was updated 7:43 p.m. to clarify that the GRCC Board voted to approve the refunding of facility bonds. A previous version of this story stated that the college was going to be selling bonds, which was not accurate.