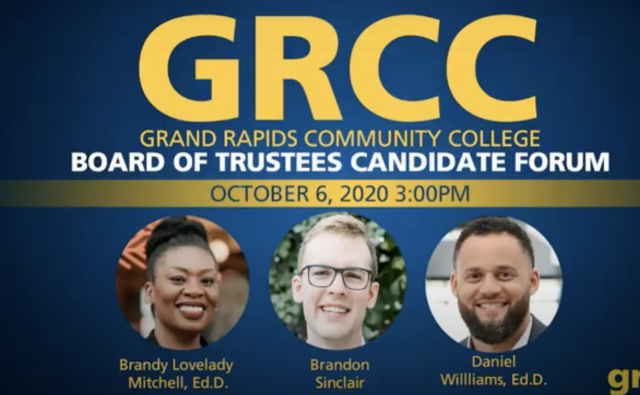 The forum was hosted by Student Alliance, the Faculty Association, and Academic Governing Council. The three candidates are running for two six year terms. The candidates were asked three questions each and then the discussion opened to questions from the public.

The first question posed to the candidates was to explain their work, educational history, reasons for running for the board, their philosophy of higher education, and their rationale for why they would best serve on the board.

Mitchell is a lifelong Kent County resident, between her and her husband they two have 50 years of public education experience. She is also a first generation college graduate,  which inspired her to continually work for the inclusivity of everyone being able to get a higher education. Mitchell recalled her classroom experience, building level experience, regional experience as the director of Diversity, Belonging, Equity, and Inclusion for Kent County schools as reasons why she would be a good candidate for the board.

“I love the college’s mission statement, I think it’s one the most diverse public institutions,” Mitchell said. “In many ways it is a mechanism for justice, in terms of helping folks secure the opportunities and experiences to help them really hone in on opportunities and enhance their quality of life.”

Mitchell said she wants to be on the board to help the region continue to thrive by being mindful of the opportunities and the disparities, and to serve as a community advocate to help close the disparity gap.

The second candidate to answer was Sinclair, who worked previously at GRCC, as well as in politics and government. He also attended GRCC and was active in student organizations. Currently he serves on the GRCC Business Department Advisory Committee while working as Community Relations Director for congressional candidate Peter Meijer.

“One of the reasons why I’m running is (because) GRCC has done much for me both as a student but also as an alumni,” said Sinclair. “I’ve seen it play a pivotal role in many people’s lives, both to give them a leg up towards obtaining the dream job they were aspiring for or to give them the level of educational attainment they were also aspiring for.”

Williams is currently on the board filling in for the late Trustee Deb Bailey. and is running for a permanent position. He has worked in various education positions and also for nonprofit organizations. He worked in Detroit at University Prep before moving to Grand Rapids to be Principal of University Prep. Williams said he realized how important supporting young people was during the transition from high school to higher education. Currently he is president and CEO of West Michigan Center for Arts and Technology to bring equity and innovation to West Michigan.

Williams mentioned his nephew, sister, and brother who are all at different points of their lives, but all taking classes at GRCC currently.

“GRCC, no matter the path, is there and is ready to support each of them,” said Williams. “I think that is an incredible testament to the college. It’s an incredible gift to the community.”

The candidates were then asked to pick the top two values of the college and explain why they believed they were the most important visions, from a list of excellence, accountability, diversity, sustainability, responsiveness, respect innovation, and integrity.

Williams was first to answer the question, and stated that it is important for the school to revisit values because definitions can change, or need to be redefined. He did say that diversity and innovation were the most important two goals the college currently has.

The two other candidates agreed that all the values are important to the college.

“Good can be the nemesis of great,” Mitchell said. “Excellence is always being able to look at ourselves and engage continuous improvement to push the needle to be even greater.”

“We can’t be excellent if we can’t make sure that the ramp is wide enough that all the diverse stakeholders and community members actually benefit from it,” Mitchell said.

Sinclair focused on excellence and accountability, stating that GRCC commits to excellence, while also focusing on the accountability that the school has to the community.

Next, the candidates were asked to rank the goals of the college through the lens of achieving societal responsibility, from teaching and learning, completion and transfer, equity, community impact, and infrastructure and sustainability.

Sinclair said with today’s unrest he would choose between prioritizing community impact or equity.

“By providing quality education and valuable degrees in various programs we’re going to help lift people up,” Sinclair said. “We’re going to give them opportunities that they dream about, that they’ve always inspired for. That community impact is vital and something that we do every day.”

Williams agreed with Sinclair saying that the climate is difficult right now, with politics, the pandemic, and racial uprising. He mentioned that one could pick any goal to argue that they are all important, and that they all impact each other. Williams chose equity, saying that it is an important goal to focus on.

“We’re uniquely situated in a space to be able to engage in these really difficult conversations,” Williams said. “Both to support students and be student centered… but also challenging our community a little bit.”

Mitchell said that she would start with the goal of equity, mentioning that students aren’t all starting at the same place. A second goal she brought up was community impact.

“I loved that a grant was secured by GRCC to help feed food insecure students,” Mitchell said. “We are engaging in equitable practices, we are meeting people with the support that they need.”

The final question posed to the candidates was how they would respond if a member of the community filed a complaint about the content of a class or a college policy.

All trustee candidates mentioned that they wouldn’t be the person to respond to that, but rather listen and aid the community, putting those people with issues in direct contact with those that can aid them.

The floor was then opened to the public for questions, however none were asked.